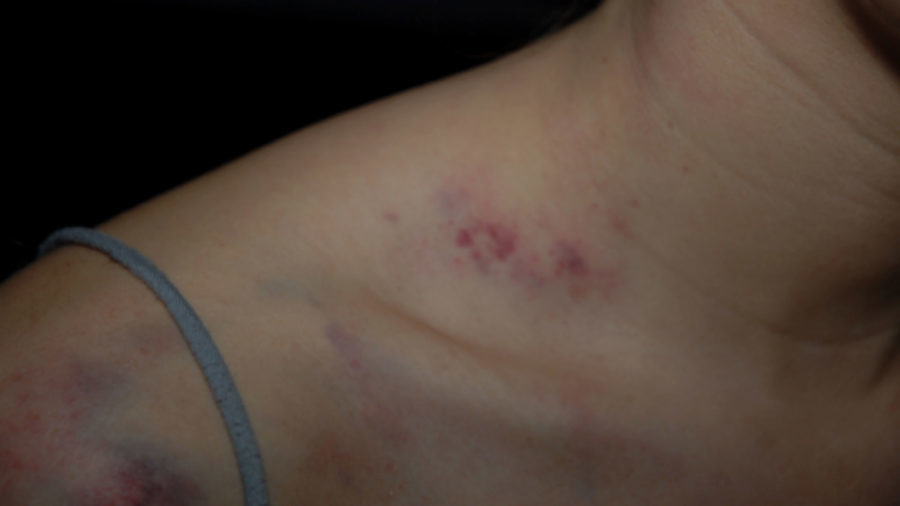 Tiffany Allison says she was beaten with a wrought-iron cross for more than four hours in 2009. After years of advocating for domestic abuse survivors, House File 263 passed on Monday, giving harsher punishments to domestic abusers and better protecting victims. (Photo: Courtesy of Tiffany Allison)

The Iowa Senate this week unanimously passed House File 263, which is designed to extend repeat abusers’ amount of time in jail and make it easier to prosecute stalking suspects by prohibiting unauthorized GPS trackers to be put on someone with the intent of stalking or harassing.

If convicted, offenders would serve no more than one year and be fined at least $315 and not more than $1,875.

It also forces offenders to serve more of their actual sentence by lessening the amount of “good time” awarded to those in prison.

“We feel this is just a small step in the right direction and look forward to working with legislators to make victims even less vulnerable in the future,” said Tiffany Allison, a domestic abuse survivor who advocated at the Capitol for three years that offenders deserve more severe punishments.

The bill targets repeat offenders who have been convicted more than three times and would require them to complete programming before their release from jail.

State senators recognized Allison, the co-founder and president of Soaring Hearts Foundation, who said she barely escaped her abusive relationship in 2009 with her then-boyfriend, who held her hostage and viciously beat her unconscious twice.

“He beat me for 4 1/2 hours using his hands, knees and feet,” Allison said. “He beat me with a wrought-iron cross.”

Her assailant was sentenced to 2 1/2 years in prison but got out after serving 10 months — only one-third — of his sentence.

Allison said she later found out that she was his fifth victim and that others had experienced similar abuse. One victim was left with a disfigured face because he constantly bit her.

When the legislation passed the Senate, she was elated with joy. She felt more protected.

Under the bill, an offender would be required to serve at least one-fifth of the maximum term, thus establishing a 20 percent mandatory minimum sentence.

In Iowa, the average jail time for a Class D felony domestic abuse assault is 17.1 months, and the mandatory minimum sentence would increase it to 36 months, the Des Moines Register reported. The offense would be punishable by up to five years in prison and a fine of at least $750 but no more than $7,500.

“I was kind of in shock,” she said. In the past, similar pieces of legislation have made it to the Senate but failed. “Obviously, I take this a little more personally than a politician or lobbyist or maybe even a concerned citizen because I was personally affected by this.”

“For me, this is common sense,” she said. “We want to protect victims.”

Allison said legislators previously told her the matter wasn’t a top priority because domestic violence doesn’t happen in their district, a point she strongly contested.

“I am glad we are finally able to get something through both chambers here on this,” said state Sen. Charles Schneider, a Republican from West Des Moines. “For those victims who are truly trying to move on with their lives, this will give them more time and assurance that their abusers are behind bars.”

But some advocates, like Adam Stark, with the Iowa Coalition Against Domestic Violence, said increasing time in prison won’t deter or end violence. “In a sense, it’s been a false solution for many people,” he told Des Moines television station KCCI.

Instead, he suggests more community-based solutions to keep victims safer. But Allison disagreed, saying, “While they may be academically qualified to do their job, they have not lived in this situation” and that the criminal justice system is more effective in punishing abusers.

“The only time that I am safe is when my abuser is incarcerated,” Allison said.