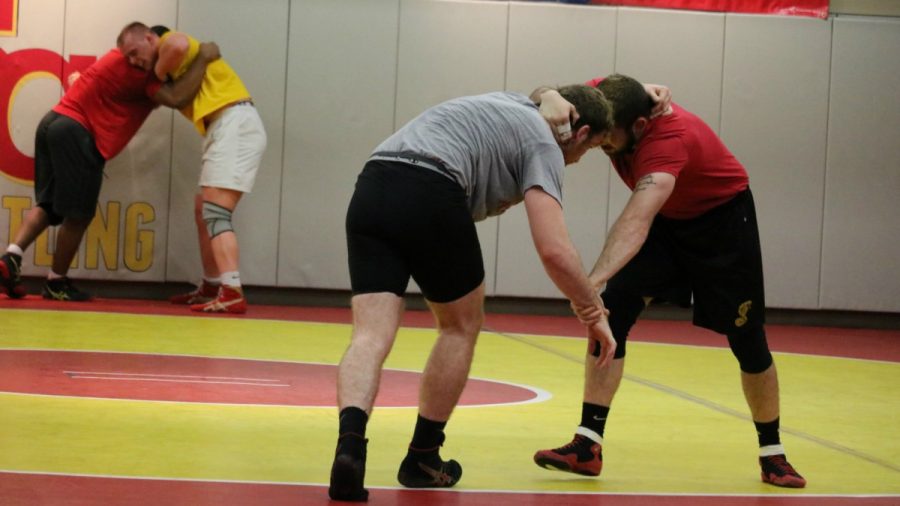 “It’s not something people know a lot about, they just see us practicing all the time, but we have an Olympic-style club team here where we can wrestle all year-round,” senior Jason Clark said. “It allows us to have structured practices all year-round with a coach.”

Clark said freestyle and Greco help wrestlers fight with their hands and put their heads in the right positions to get takedowns. He said freestyle helped him learn to score from any position.

Greco is a style focused on upper-strength strength and throws without being allowed to touch the opponent’s legs during throws and takedowns.

Freestyle is scored differently than folk-style. In folk, a takedown is worth two points every time, but in free, takedowns can be worth up to five points if they are flashy enough.

In both freestyle and Greco, the rules are more relaxed. Wrestlers can lock their hands-on throws, can grow full facial hair and are not required to wear headgear.

“Having a beard can kind of hurt a little bit sometimes, but it is definitely worth it to look 10 years older than you actually are,” freshman 197-pounder Sam Mathis said. “I will not wear headgear for tournaments. Wearing headgear is probably my least favorite part of wrestling.”

The first freestyle and Greco joint tournament is mid-April and is optional for wrestlers. Clark said he has been to two such tournaments while at Simpson.

“They’re different for sure. There’s a 17- to 20-year-old division,” Clark said. “Once you’re over 20, you’re in the senior-level division. I wrestled multiple Division I national champs when I was at a tournament. It was rough. I did wrestle very well, but there were some quality guys there.”

Clark said freestyle is about awarding the aggressive wrestler and awarding the tenacity for which wrestlers are known. In freestyle, a wrestler can be awarded points for exposing their opponent’s back. There are no points for escapes, so if a wrestler gets taken down they will try to stay down and stall. After about 15 seconds, the refs will stand both wrestlers back up.

“I bring a lot of funk,” Clark said. “I try to make it my mantra to wrestle out of every position I get in. Even if I’m sitting on my butt with a foot in the air, I want to look for a way to score points. It really brings up the level of creativity. Once you get relaxed you realize you can score from anywhere. You gotta just get creative and get funky with it.”