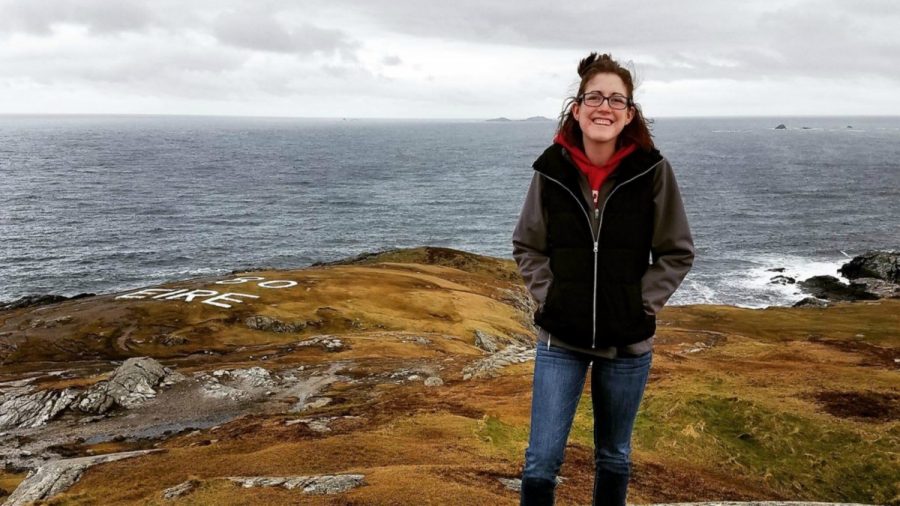 Senior Erin Thompson lives in a small Ireland town teaching elementary students, but still has time to immerse herself in the Irish culture and travel to the northernmost point of Ireland, Banba’s Crown. (Photo: Courtesy of Erin Thompson)

These students are teaching abroad this semester in different parts of the world including England, Ecuador and Ireland.

Starting last year, Simpson partnered with Global Gateway for Teachers offered through the School of Education at Indiana University. This program is designed to help students complete their degree requirements for student teaching while also giving them the chance to experience another culture.

As soon as Louk, Schafer and Thompson heard about this international student teaching experience, they jumped on the opportunity and applied for the program, later finding out they were accepted.

“I thought it was an excellent opportunity as a teacher to be able to meet and teach students in a country other than my own so that I could expand my knowledge about children and teaching in general,” Louk said. “Honestly, I just couldn’t imagine a better opportunity.”

Louk, an art education major, is in Oxford, England, teaching at St. Gregory the Great Catholic School, which is a public secondary school. She will teach Year 7 through Year 13, which is the same as grades six through 12 in America, Louk said.

“I live in a part of Oxford that is not as fancy and is poverty-stricken in some areas,” she said. “The school itself does not have a lot of money, which means we use the resources we have. The students still produce very good artwork despite the tough situation.”

In the two and a half weeks she’s been there, Louk has visited Tate Modern, an art museum in London, and has seen several pieces by famous artists. She’s also noticed how difficult it is to not pick up the accent.

“Being in a different country means I have had to pick up different social queues and have had to adapt to the way British people speak,” Louk said. “I have started saying ‘quite,’ ‘lovely,’ ‘brilliant,’ ‘fantastic’ a lot more recently. It’s really funny. All of my students can tell I’m from America though as soon as I open my mouth.”

Austin Schafer, who’s teaching 11th- and 12th-grade English at Unidad Educativa Municipal Quitumbe in Quito, Ecuador, said students seem to be more motivated to do well in class and don’t mind if a class ends or starts late.

“There are no bells to tell students when class is over, but instead it just ends when the teacher is finished teaching,” Schafer said. “Also, teachers go to the different rooms to teach their subject instead of the students coming to the teachers, which is something very different from what I have experienced in the U.S.”

One challenge Schafer faced was teaching classes on his own when his mentor teacher had to attend a meeting.

“At first it was a bit daunting to lead classes in my foreign language, but the students were incredible and I learned that everyone at the school was accustomed to plans changing at any moment,” he said. “I believe I have really benefited from the challenge of changing my idea of a how a school should work to match the culture of the school where I am placed.”

Luckily for Schafer, he’s had experience studying abroad before in Argentina, so he’s been exposed to different cultures. His host family has taken him to see the Equator monument, Virgin Mary statue, churches and different markets.

“The experience has been awesome and I have been blessed with another great host family,” he said.

For Thompson, preparing for the trip was a challenge, especially packing.

“Packing for 12 weeks total was hard because I feel the need to take everything, but I managed to make it all fit and only take the essentials.”

Although traveling to a foreign country can be frightening, Thompson’s learned to immerse herself into the culture and take in what Ireland has to offer.

“What I have learned about being in a different country is that, yes, there are things about us that are different and you have to be flexible and adapt,” she said. “But that in the end, we are all the same as humans and want the same things out of life.”

Louk, Schafer and Thompson recommend that students teach abroad because it’s a chance to build confidence, gain a different perspective on life and learn more about education, other cultures and yourself.