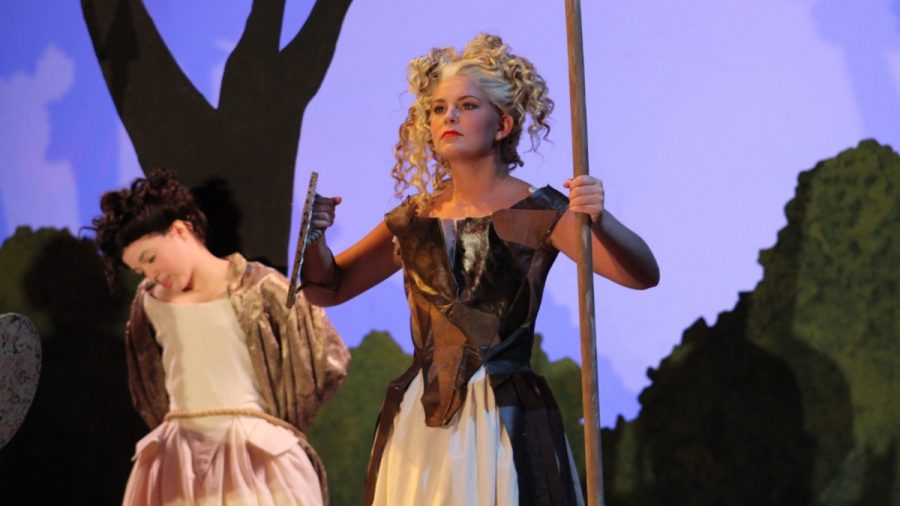 INDIANOLA, Iowa — Theatre Simpson presents a story celebrating the rights of women and a fight for equality as a part of Simpson College’s Women’s History Month. The play is based in the 17th century but resembles the modern day.

“Playhouse Creatures” by April de Angelis tells the historical story of five famous English actresses, Nell Gwyn, Elizabeth Farley, Rebecca Marshall, Doll Common and Mary Betterton, during Restoration in 1669 and their fight to be viewed as legitimate actresses. During the time, theaters reopened after 17 years of Puritan suppression, and the new king allowed women to act onstage for the first time.

“The author was inspired by the anger and frustration of conditions of the actresses at the time,” director Mimi Kammer said.

Before women could act onstage, men played their roles, which caused the women to face many challenges to gain the respect of men.

“It’s about how they are looked down and how they face all these different problems because they are women,” freshman Morgan King said. “Each of them try to reach a goal, but a step before they get to that goal it gets ripped away from them. I think it has a lot of power and emotion in it.”

The play follows the women as they fight for equality in the theater, a message that is relevant today, Kammer said.

“This is not something you see every day. You will be entertained. It will give you a lot to think about in a good way,” Kammer said.

The play is suggested for mature audiences due to swearing and adult material. Children under the age of 10 will not be allowed to attend.

Performances will be at 7:30 p.m. Friday and Saturday and at 1 p.m. Sunday in Pote Theatre in the Blank Performing Arts Center. Tickets are $9 for adults, $7 for students and seniors, and free for Simpson students with IDs. To reserve tickets, go to simpson.tix.com or the box office at 515-961-1601.