Despite hectic state of politics, junior feels called to DC 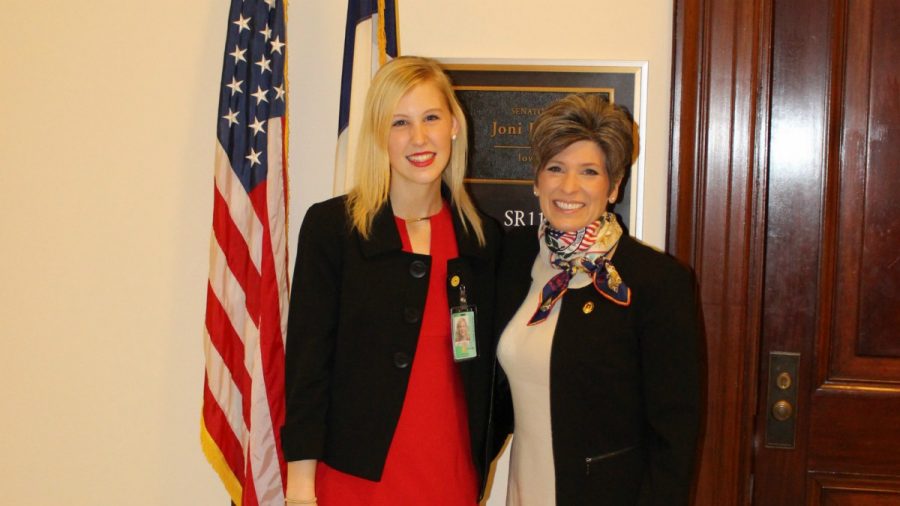 INDIANOLA, Iowa — From one capital to another, junior Allie Karpurk can’t get enough. After growing up outside Phoenix and going to school near Des Moines, she’s taking on the nation’s capital, Washington, D.C.

Karpurk is part of the Capitol Hill Internship Program which allows students around the country to intern in the U.S. Capitol. Coming from a small school, though, doesn’t put Karpurk at a disadvantage among the other 21 students, she said.

“It’s all about who you know versus where you’re from,” Karpurk said. “There are people from Princeton and really wonderful colleges, but they don’t have any high leverage above me. It’s all about the connections.”

Karpurk hasn’t abandoned her Iowa connections in Washington, D.C., however. She serves in Sen. Joni Ernst’s office with Simpson College alumna Josie Beecher and an intern from Coe College, attending briefings, taking memos and answering phone calls on any given work day.

During Karpurk’s first week, Congress experienced its busiest day in history, receiving an average of 1.5 million phone calls in the week, CNN reported.

“It was constant go, go, go for nine hours straight,” Karpurk said. “Most of us are supposed to get an hour lunch, and we don’t even take it because we’re so busy.”

Karpurk and the rest of the interns keep busy both inside and outside the office. After working nine-hour days, they take classes once a week and take outings around D.C., exploring museums, attending shows and taking in the city’s history.

“I love that I’m never bored,” she said. “I think just getting to meet the people and getting to have this experience through Simpson is something I’m eternally grateful for. It’s never boring out here, and there’s always something to do.”

It’s easy to save time on transportation when the CHIPs house is a 10-minute walk from the Capitol. Living in the house has also helped Karpurk combat the homesickness she feared when she moved out to the East Coast, so far from Simpson and Arizona and her support system.

“There hasn’t been a moment of loneliness while I’ve been out here, which I know I was slightly worried about even though I can talk to anyone,” she said.

The connections and the experiences Karpurk is gaining are invaluable, though.

“It’s broadened my understanding of politics more so than I already thought,” she said. “Yeah, politics is kind of a dirty business and even though as I learn, I’m excited for the future. I’m definitely not entirely sure if it’s something I want to do.”

It’s certain she wants to be in D.C. Yes, it’s different. No, she can’t drive in it, but she knows it’s where she wants to attend law school, especially in such an interesting time in politics.

“It’s a crazy time in history to be here. There’s a lot going on,” Karpurk said. “It’s cool to see that people are that involved and passionate about politics that they’re reaching out to their congressmen and showing their support or opposition. It’s a really cool time to be out here and to be involved politically.”