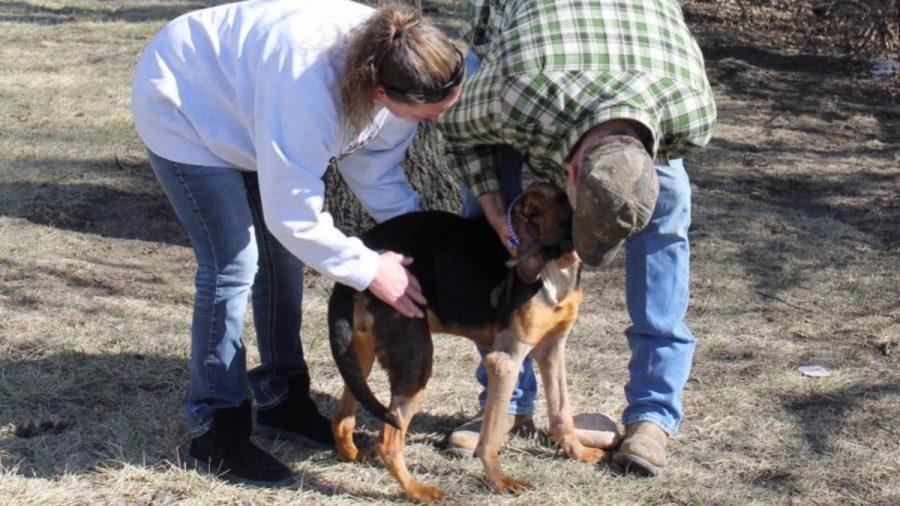 WARREN COUNTY, Iowa — The Warren County sheriff has adopted the bloodhound he saved from unlivable conditions on a property near Indianola, the Animal Rescue League of Iowa posted on its official Facebook page.

Penny, who had gone by the name Karma during her recovery process, is one of 19 dogs, along with multiple dog carcasses, found in early February on Sandyville property rented by Lindsey Morrow. She has since been charged with five counts of animal torture and 22 counts of animal neglect, as well as theft, fraud and ongoing criminal conduct.

Penny was one of the most severely abused dogs in the case. She has received a lot of adoption interest nationwide, but this pair was meant to be.

The ARL of Iowa said in a post that Warren County Sheriff Brian Vos, along with other rescuers, hadn’t seen Penny since the Feb. 2 rescue. The dog had been in hypovolemic shock due to hypothermia and had extensive injuries. She lost an ear and was in intensive care before going home with her rescuer.

“Sheriff Vos hasn’t been able to get Karma out of his mind since that day, and yesterday, she was cleared for adoption. So today, they met again,” the post reads. “We are happy to announce that she will be going home with the very person who saved her life and helped collect the evidence that will hopefully bring her alleged abuser to justice: Sheriff Vos.

“Soon, Karma will know the love she has always deserved and true to her new name, Karma will repay that love 100 times over.”

Vos and Penny were reunited at the Iowa Veterinary Referral Center. “She made it through the night and (I) went out and saw her the next morning, and I knew she was something special,” Vos said. “She had that look in her. She needed help.”

“It’s absolutely horrific to imagine dogs in that situation,” Animal Rescue League spokesperson Stephanie Filer said of Penny, who has spent the last five weeks in intensive care. “We didn’t think she was alive until we saw her take a breath.”

Penny marks the ninth adoption from the February rescue, and there are 10 more still recovering. The Animal Rescue League said other dogs will be up for adoption soon.