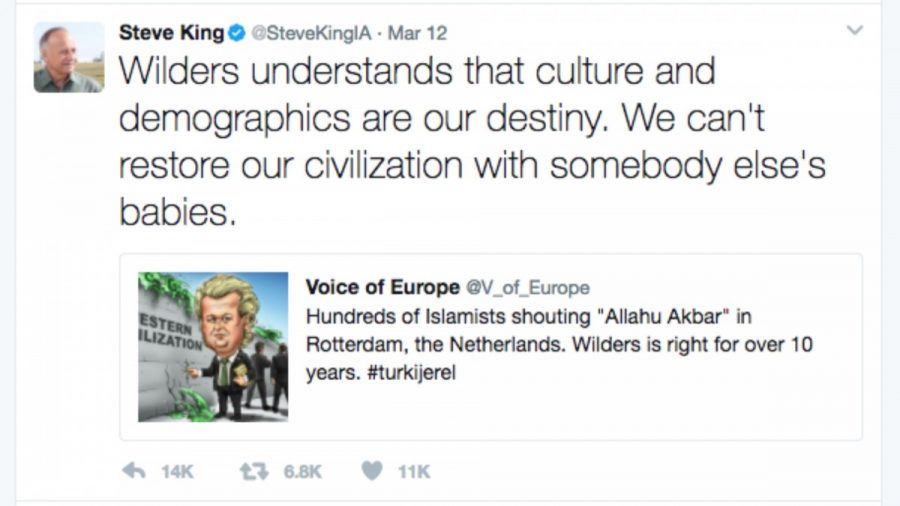 DES MOINES, Iowa (KCCI) — U.S. Rep Steve King, R-Iowa, is back in hot water after he tweeted support for far-right Dutch politician Geert Wilders, implying that “our civilization” can’t be restored with “somebody else’s babies,” referring to Muslims, and warned of a liberal effort to break down Western Civilization.

Wilders, who opposes immigration and has spoken against Islam, is preparing for an election Wednesday.

“Wilders understands that culture and demographics are our destiny,” King, who has served in the U.S. House since 2003, tweeted on Sunday. “We can’t restore our civilization with somebody else’s babies.”

King quoted a tweet in which a cartoonist depicted Wilders using his finger to plug a wall with the words “Western Civilization” written on it. In the background, protesters hold signs saying, “Infidels, know your limits” and “Freedom of speech go to hell.” The tweet reads: “Hundreds of Islamists shouting ‘Allahu Akbar’ in Rotterdam, the Netherlands. Wilders is right for over 10 years. #turkijerel.”

The tweet prompted criticism by party leaders, including Gov. Terry Branstad who said at a weekly press briefing that he disagreed with King’s remarks.

“From time to time, (King) just says things that we don’t agree with,” Branstad said. “And we have always been honest about that. We have worked with him on a lot of things, and some of the things we just think are wrong and we disagree with it.”

Lt. Gov. Kim Reynolds also weighed in, saying that she disagrees with the offensive comments, which are not a reflection of Iowans throughout the state.

“First of all, I do not agree with Congressman King’s statement,” said Jeff Kaufmann, chairman of the Republican Party of Iowa, in a press release. “We are a nation of immigrants, and diversity is the strength of any nation and any community.”

U.S. Rep. David Young, a Republican from Iowa’s 3rd District, also chimed in, saying in a statement: “America is not about any one color, or one ethnicity, or one faith. America is about self-government, the rule of law, freedom and the liberties and rights given in our Constitution.”

In an interview Monday with CNN’s Chris Cuomo, King defended his remarks, saying, “I meant exactly what I said,” and noted that his message is consistent as he delivers it to countries throughout Europe.

“We need to get our birth rates up or Europe will be entirely transformed within a half a century or a little more,” King said.

King said to avoid the same fate, Americans should promote its own birth rate and culture.

In reference to a question about white nationalism, King stated the debate doesn’t revolve around advancing one race but rather advancing American culture and Western civilization.

“It’s the culture, not the blood. If you could go anywhere in the world and adopt these little babies and put them into households that were already assimilated into America, those babies will grow up as American as any other baby.

A firestorm of criticism ensued, with Twitter users calling the Republican Iowa congressman a “bigot,” a “maniac” and an “embarrassment.”

Former President Bill Clinton’s daughter, Chelsea, reprimanded King for his comments, tweeting: “Clearly the congressman does not view all our children as, well, all our children. Particularly ironic & painful on Purim.”

Vermont Gov. Howard Dean said: “King is a total ignoramus and no one takes him seriously. He does give off good quotes to outrage people, though.”

It’s not the first time that King has gained notoriety for his controversial statements.

During the 2016 presidential election campaign, King, who supported President Donald Trump, said during a panel discussion on MSNBC that white people contributed more to civilization than any other “subgroup.”

In the summer, King came under fire for displaying a Confederate flag on his office desk, even though Iowa was a Union state during the Civil War.

In 2013, he claimed that for every immigrant who is in the United States illegally and becomes a valedictorian, there are “another 100 out there that – they weigh 130 pounds, and they’ve got the calves the size of cantaloupes because they’re hauling 75 pounds of marijuana across the desert.”