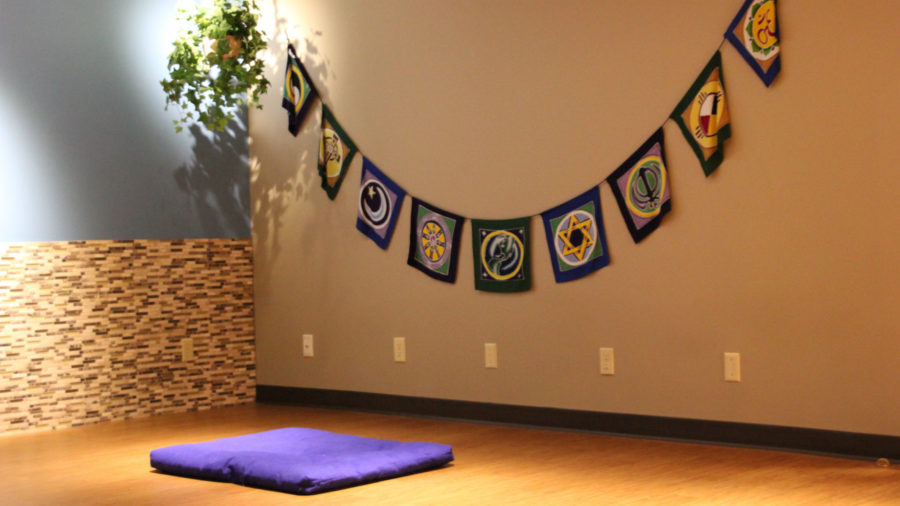 A recent addition in the basement of Smith Chapel at Simpson College has been growing in popularity among all walks of life on campus.

Ellie Luebbe, the interfaith relations intern at Simpson, is constantly finding new ways to attract students of every religion to come to the meditation room.

“The meditation room is used for all religious or non-religious students on campus,” she said. “They can practice their religion, or lack of religion, that they choose to. This room has only been the meditation room for about two years now. The previous interfaith intern finished the establishment and successfully got it up and running.”

During the short period of time that the room has been open to the public, it has already been colored with various decorations and has many things to captivate anyone’s attention.

“There (are) educational textbooks in the back where you can learn about different religions or learn how to act appropriately in different services that they’re not familiar with,” Luebbe said. “But it’s largely a place where people can practice their religions freely on a campus that’s primarily Christian.”

On top of being a place for silence and comfort, the room also brings large groups together for special events held by the interfaith group.

“Our interfaith group on campus at least once a semester brings in the priest from the Des Moines Zen Center, and he comes and leads a meditation service” Luebbe said. “He teaches students how to meditate and even does a moment of meditation for students to follow along with.”

The priest for the Des Moines Zen Center practices Zazen meditation and makes yearly trips to Japan to study in monasteries.

“Zazen meditation is sitting completely still and trying to let your mind live as much in the present as you can, followed usually by a small scripture reading. For students first trying it out, it can be hard to effectively meditate,” Luebbe said.

It’s no surprise that a place solely designed for relaxation and comfort would become popular during midterms and finals, but the meditation room is already an area for daily visitors.

“This room is probably used every day. There (are) Bible studies that happen, there (are) group studies for non-religious students, or students of all religious backgrounds come and use this room,” she said.

Valerie Wilson, the connections intern with Religious Life, along with Travis Hurst and Elise Taur, holds a weekly meeting in the meditation room called Better Together.

“In Better Together we discuss various religious texts and talk about the meanings to us from different religious backgrounds,” Wilson said. “It’s really interesting because we get educated on what other religious texts say and have the opportunity to discuss.”

Better Together meets at 8 p.m. every Tuesday.