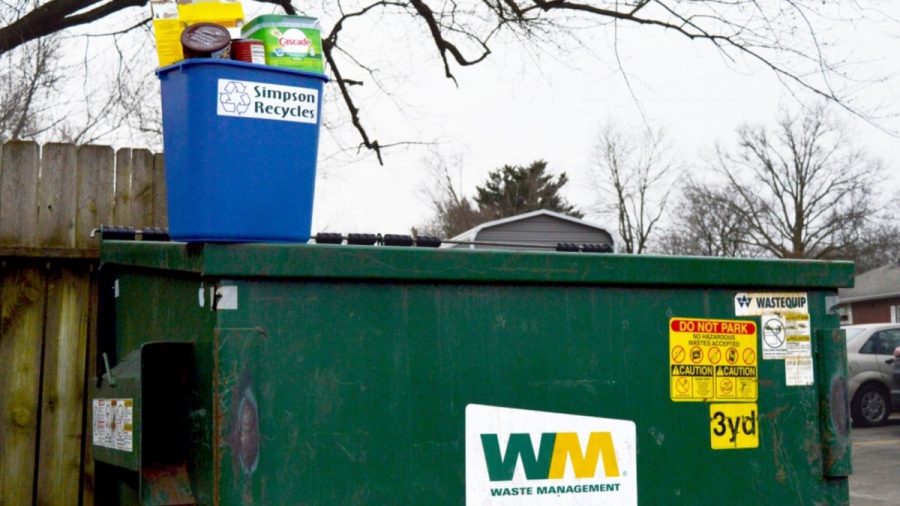 INDIANOLA, Iowa — Juniors Laken Baird and Kim Boehm heard the rumor a few times before. When recycling on campus, a friend would say, “Don’t put that in there, it all goes to the same place anyways.” They chose not to believe it.

And then one day they watched a garbage truck pull up to the bins outside the Weinman apartments and dump the recycling and then the trash in the same compartment.

Baird said she was disappointed.

“We have an image of trying to be very progressive and eco-friendly, and yet you’re hearing from multiple people that it all goes to the same place and then you see it for yourself,” she said.

Baird and Boehm decided to contact Waste Management about the issue.

Waste Management officials told Baird and Boehm that any trash in the recycling bin contaminates the entire load of recycling. Therefore, they have no choice but to treat the recycling as trash.

John Harris, director of facilities, said that the recycling is picked up on Wednesdays, and if it is deemed contaminated, they will call the garbage truck to pick it up on its route on Friday.

Harris said when he walks through campus, he’ll check the bins for contaminated recycling.

“Colonial and Washington is a prime example. That one is a high target for people putting trash in the recycling. So when I go by that and see it’s loaded with trash, I’ll call Waste Management and say, ‘On your normal trash pickup, go ahead and take this one as well,’” Harris said.

Harris said he makes that call once a month at the most.

Harris said he firmly believes in recycling and getting the message out about how to recycle is huge.

“Recycling are the yellow-top dumpsters and they have stickers all over them. They are commingle so they take all the products in the bin and they separate them at the station. Don’t put recyclable items in a trash bag because that’s not a recyclable item,” Harris said.

According to IowaWatch, half to nearly three-fourths of what Iowans dump into landfills could have been recycled or composted and in some areas.

“As part of our amenities that we put into every residence hall room, we add a recycling bin that the college provides that is passed out at the time of check in each semester,” he said.

The recycling is single stream, so students don’t have to worry about separating the recycling components.

“We also try to put on the back of every room door the list of things that are recyclable,” Behaunek said.

Sydney Samples, president of the Sustainability Club, said the difficulty of recycling deters students from doing it.

The Sustainability Club is working on a project to put recycling bins inside the first- and second-year residence halls, which would encourage students to recycle more.

“Right now, everyone has a recycling bin in their rooms, but right now they have to go outside to dump it. So outside of Barker, there’s a big bin and outside of Kresge, they share a recycling area with Pfeiffer so that one’s a lot more tucked away,” Samples said.

Samples said students would ideally be able to dump their recycling into these bins without leaving the residence hall and someone else would take it out. This would possibly be the job of a recycling job study, but Samples isn’t positive yet.

“We’re at the very beginning of it, just to make sure it’s even possible to get recycling bins in the buildings,” Samples said. “We’re really optimistic that we have a possibility to do at least something.”