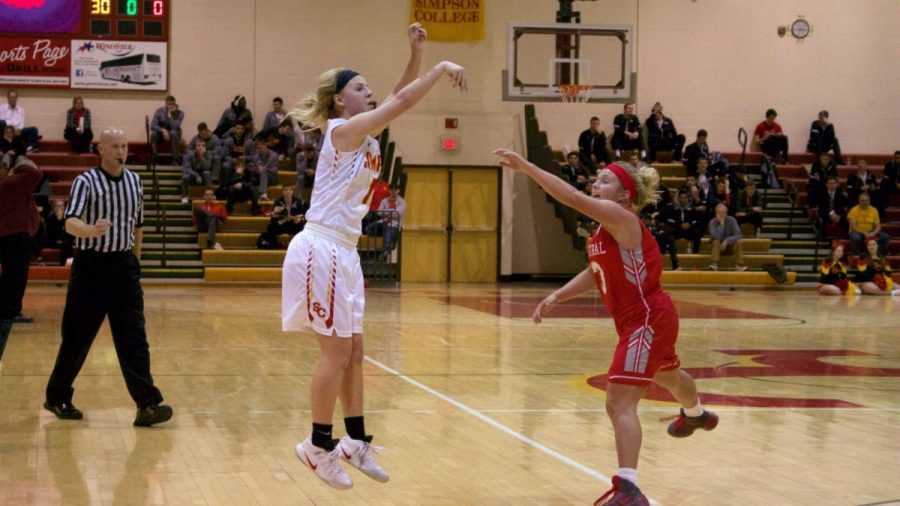 Freshman Janey Botkins shoots 7.5 points per game, the second most on the team. Botkins is one of five players that is seeing more time on the court as an underclassman.

INDIANOLA, Iowa — As a freshman, most athletes don’t expect to be seeing as many minutes as Janey Botkins does.

In just her first year at Simpson, Botkins (7.5 points per game, 1.1 assists per game) has found herself playing a large role in the success of the Storm women’s basketball team.

Averaging nearly 25 minutes per game, Botkins is seeing the third most playing time on the team.

The only athletes seeing more time on the court are seniors Britney Boland and Megan Lankford, who are seeing closer to 28 minutes per game.

When the season started, the starters shared more experience and age. However, injuries happen and lineups change.

Now that she is seeing more minutes, Botkins feels more pressure to perform at a high level when she’s on the court.

With the pressure Botkins feels, she began putting in more, time pushing herself to be better.

“I have spent more time in the gym, outside of practice, working on shooting and skill work like ball handling,” Botkins said.

With all the injuries the team has already faced this season, head coach Brian Niemuth wanted to give younger players more in-game experience so they have it when they need it down the road, hopefully in the Iowa Conference tournament at the end of the season.

With the youth of the team comes new challenges for Niemuth in practice and game situations alike.

“A lot more patience is needed when dealing with their mistakes, knowing it just takes time to get the experience they need. Every player goes through this learning process,” Niemuth said.

Another freshman seeing plenty of playing time is Allyson Simpson. Much like Botkins, Simpson (3.6 points per game, 1.6 rebounds per game) came to the Storm expecting to work her way up the lineup and eventually be a starter.

Although she has only started in two games this season, Simpson is continuously challenging herself at practice to ensure her teammates and coach see her dedication to the game she loves.

“I really look over the scouting reports and make sure that I know the opposing team very well. I also try to focus a lot on my shot and making sure I’m taking game shots during practice,” Simpson said.

The biggest challenge Simpson has faced in her increased role is keeping up with the pace of college basketball.

“College basketball is a lot faster than high school. Working on hustling more and sprinting up and down the floor every time is something that I needed to get used to,” Simpson said. “The change of pace is very significant and the level of defense is much higher than in high school.”

Along with Simpson and Botkins, Rachel Freland, Kali Rasmussen and Claire Johnson are seeing an increase in playing time due to injury and performance.

As the season continues, the Storm are looking to improve their record and get back near the top of the IIAC before the conference tournament starts.

“We’re 3-4 against conference opponents, halfway through conference play. We are going to play each team one more time, and I definitely see the ability in our team to be in the top four of our conference,” Simpson said. “Every single game is going to be a close one and an important one. It’s important that we come ready to play every game.”

The Storm are 6-10 on the season. In the next few weeks, the team will find themselves in the bulk of conference play. The Storm will face Loras, Luther and Wartburg with hopes of avenging previous losses to them this season.