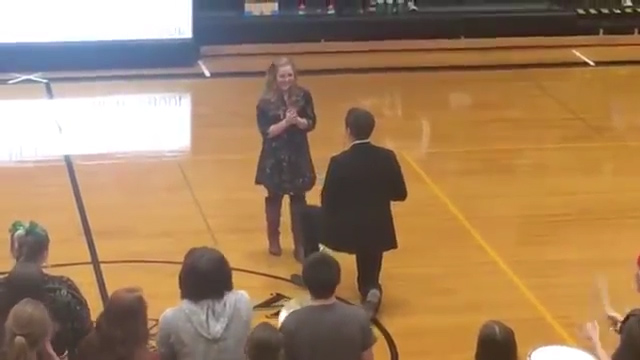 KCCI anchor Eric Hanson, known for his “This Is Iowa” segment, posted a 51-second clip on his official Facebook page of West Marshall High School’s band director Ryan Runyan, 26, proposing to his longtime girlfriend, Stephanie Vampola, 28, which has been viewed nearly 80,000 times and shared more than 400 times as of Monday afternoon.

The couple had been dating for eight years, according to Vampola, who said she’s always wanted a YouTube-worthy proposal.

“You’re just too good to be true,” Runyan sings in the video, part of Frankie Valli’s 1967 gold record “Can’t Take My Eyes Off You.” The performance took place Dec. 22 at a West Marshall varsity boys basketball game in State Center.

After an energy-filled showcase, Runyan got down on one knee and popped the question. (She said yes, of course. How could you not?)

“Congratulations on your engagement,” one Facebook user wrote. “Loved the way he proposed to you. He’s got style!”

“Those kids will never forget this either! Congrats!” wrote another.

It makes us so happy! Congratulations to the deserving couple!