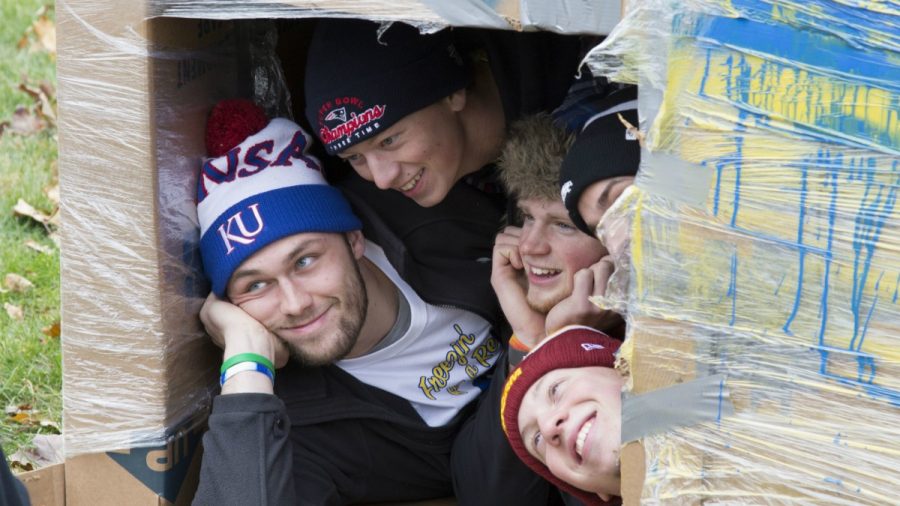 Four thousand dollars, 24 hours and temperatures in the 30s. These were the prospects facing the men of the Alpha Tau Omega fraternity at Simpson College on Dec. 2-3, when they positioned themselves in the middle of campus to spend the day in the cold to raise awareness for homelessness.

By the end, ATO had raised $5,249.54 for Hope Ministries in Des Moines to help buy food and clothes for the homeless in the area, exceeding their goal and more than doubling what was raised the year before, according to member Jake Gibney, who organized much of the event.

“I specifically remember (Grant) Waller screaming, ‘Oh my god!’ in our meeting, and I lost it when I found out about it,” Gibney said. “I was high-fiving, hugging, chest bumping, all that bro stuff.”

Freezin’ For a Reason is ATO’s most popular annual event, as well as their most successful.

Trevor McKee, a member of the Alpha Tau Omega fraternity, was among the 30-plus fraternity brothers who participated in the fundraiser.

“I have a lot of fun every year with this event,” McKee said. “It really brings the guys closer together and it’s a lot of fun to take part in.”

On top of raising money all day for the homeless, the event was sponsored by multiple businesses. Most of the area businesses donate annually such as Corner Sundry, the Stitching Place, Sports Chiropractic, J’Rene and many others help support the fraternity’s philanthropy.

Freezin’ For A Reason not only raises awareness to an important issue but also shows the unity among the Simpson community.

“Everyone is incredibly supportive of this event, and it always surprises us every year to see all the support,” McKee said. “The past two years, the sororities have surprised us with food and hot chocolate. The other fraternities come out and help and it’s really cool to see all of Greek life, and Simpson as a whole, come together for this.”

“In the past recent years I believe that the event has fallen on one of the coldest days of the year,” McKee said. “We’ve prepared for it mentally. We’re Iowans so we’ve prepared for it physically, and the cold isn’t going to phase us. We are all really excited to raise awareness and raise money for the cause.”

The event has gained such a considerable amount of attention that KCCI has come down the past three years to report on the event.

Although Freezin’ For A Reason is over for this year, you can still help out the issue of homelessness by volunteering at a plethora of organizations around the Des Moines area, such as Hope Ministries, or donate food and clothing to shelters.

To become involved with the homeless aid projects at Hope Ministries, visit http://www.hopeiowa.org/pages/learn/what-we-do.