Here’s a look at standout moments in fall athletics 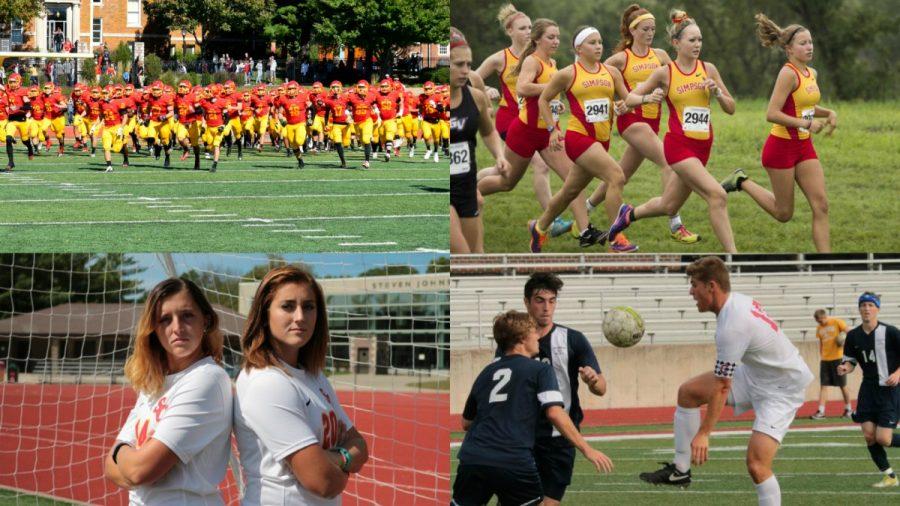 by Matt Lash, Special to The Simpsonian

With the beginning of the winter comes the end of fall athletics. This fall, Storm athletes showed great improvement and are already looking forward to competing again. There are four major sports that are doing normal season of competition during the fall months: football, cross country, and men’s and women’s soccer.

The football team closed their season against conference leading Coe College Saturday. Jordan Beem capped off his collegiate career with a career-high 227 yards and became the fifth player in program history to eclipse 3,000 career rushing yards. Senior defensive end Isaac Frazier closed out a standout career as well, leading the IIAC in sacks and tackles for loss, with 11 and 14 respectively, for the second straight year. The Storm finished the season 3-7 overall, but they were never discouraged.

“The guys fought to the end, but that’s never been an issue with this football team,” head coach Matt Jeter said. “The issues have been executing throughout the game.”

Next season, the team looks to improve on some late game opportunities and continue to strive for success on the field.

Also on the turf, the men’s and women’s soccer teams were competing at a high level.

“I am looking forward to seeing who will step up into leadership roles for next fall,” women’s head coach Jill Serafino said. “We are still rebuilding the program and have lots of younger players.”

Although they doubled their conference wins in a year, the women are looking to fight for a spot in the postseason next season.

“The senior class this year was very strong in terms of leadership and ability,” Serafino said. “This being said, freshman Aimee Shrock and transfer Maddie Simmons were newcomers that contributed a great deal. Aimee was a consistent presence each day and Maddie was the spark we needed up top in the second half of the season.”

The team finished the season 3-11-3 overall.

On the men’s side, led by Garrett Pochop, the Storm finished the season 12-8-1 overall and 5-3 in the Iowa Conference, finishing in a four-way tie for third in the conference standings. Simpson advanced to the IIAC Tournament semifinals for the fourth time in six years under head coach Rick Isaacson.

“We bring back nine of 11 starters, so we’re optimistic about the 2017 season,” head coach Rick Isaacson said. “We were a youthful side this fall, but that youth will become an asset in 2017. The future is bright.”

Isaacson had some special words for the seniors for a great season: “I want to thank the seniors for their dedication and commitment to our program. You led by example, displayed tremendous work ethic, and you represented our program with dignity and class. Thank you.”

Simpson athletics are keeping themselves in people’s minds off the turf as well.

This season, the men’s and women’s cross country teams have experienced success in a way they weren’t expecting.

For the women, the season was full of ups and downs as the team was plagued by injury. While top performers were unable to compete, other athletes stepped up in a big way. Courtney Neuendorf ran her best time (24:04.9 in a 6K race) at the regional championship last week. While Neuendorf led the Storm in the last race of her junior year, Sadie Timms held her own by finishing 84th after being injured for a large part of the season.

“I am looking forward to great leadership from Sadie Timms and Courtney Neuendorf next season,” head coach Heath Moenck said.

While the women may have had a rough season due to injuries, the men were as healthy as ever, and it showed.

The team had a solid outing at the regional championship, finishing 13th in the competitive region finale. Senior Blake Willadsen led the Storm for the second straight year with his 46th-place finish (26:28.5 in an 8K race). After leading the Storm in the IIAC championship, senior Ethan Pellegrino finished 69th overall to finish his collegiate career.

“Ethan Pellegrino capped off his career with a very strong season,” Moenck said. “Morgan Moline also stepped up this year and saved her best for last.”