MBB season recap: What a difference a year makes 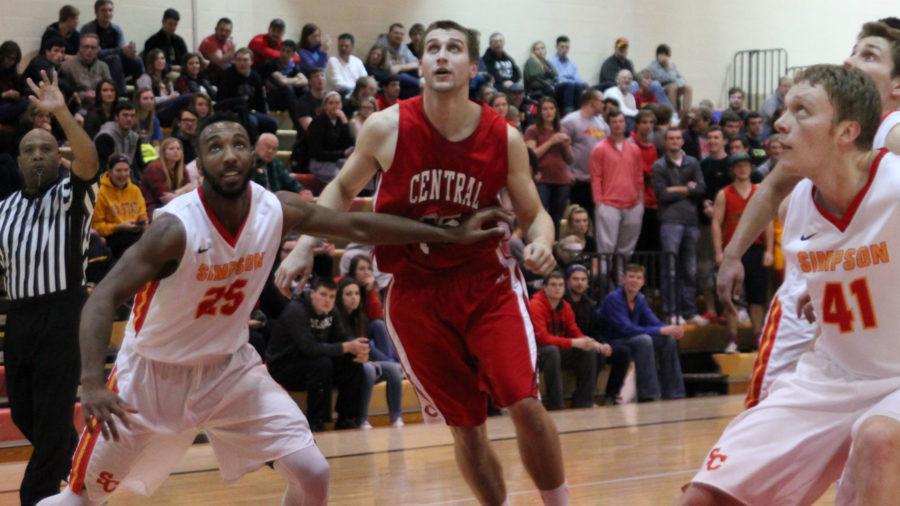 by Brock Borgeson and Hunter Hillygus

In 2015-16, the Storm were 15-11 (8-6 IIAC), finishing third in the league and recording Division III’s fourth-best win differential relative to a team’s differential from the previous year.

While Simpson wasn’t successful in winning the conference tournament or a game in postseason play, in an effort to rebuild the Simpson men’s basketball program, this year was a resounding success.

“I’m always going to remember this team, because it’s my first one (at Simpson),” said head coach Brad Bjorkgren following Tuesday’s season-ending loss against Buena Vista. “They’ve laid the foundation for the things we’re going to do in future years, and I want them to be proud of what they’ve established at Simpson and for the men’s basketball program and to know they got it started,” Bjorkgren said.

The Storm had only won 10 games in the previous two seasons, and despite not having the opportunity to play with a full recruiting class to Bjorkgren’s name, the first-year head coach at Simpson was able to unite a group that didn’t have much belief.

Bjorkgren mentioned that it was a reasonable goal to shoot for the Iowa Conference Tournament this season. Instead, Simpson suffered an 89-87 loss to Loras in the regular-season finale short of earning a No. 2 seed and a bye in the tournament.

The difference and eventual turnaround was cohesion and energy, two things evident in the team in the very first home game of the year against Graceland University when the Storm sparked some life into Cowles Fieldhouse with 14 3-pointers.

Bjorkgren didn’t realize it when told after the Graceland game that Cowles hadn’t been that energized in a long time. Seniors Dillon Gretzky, Tyler Anderson and Leif Olson could have spoken for that after a losing-laden stretch filled with tumult and dissension. None of that existed this season.

“We came together. I think that’s the biggest thing,” Gretzky said following the loss. “When you have a team that has all bought in including the coaching staff like we were this year, you can achieve a lot of things, and I think that’s what we did. It’s been a great year. I wouldn’t trade it for anything. I love this team. I love this coaching staff, and I’m going to miss it.”

Gretzky finished his career with 847 points, averaging 9.6 ppg in 88 ball games including a career-best 14.2 ppg this season. Gretzky, Olson and Anderson were instrumental in Bjorkgren’s eyes in the cultural shift of the program.

“I appreciated the seniors’ hard work because, all of the sudden, here comes a new guy in for their senior year and they were very good for 74 practices,” Bjorkgren said. I wish we had a 75th practice. The reason we were successful was because of all their hard work.”

A premature look ahead

With only three seniors departing, Simpson has a lot of positives to look forward to next year, including a full year of recruiting for Bjorkgren and his staff.

Simpson will likely be looking for a post presence in the off-season to complement a guard-heavy roster.

No. 5 seed Central took down No. 1 seed Dubuque in the conference semifinals and played No. 2 seed Wartburg on Saturday, Feb. 27 in Waverly for a trip to the NCAA Tournament.

The preseason coaches poll won’t likely keep Simpson out of the conversation for being in that position next year, unlike its prediction in 2014-15.