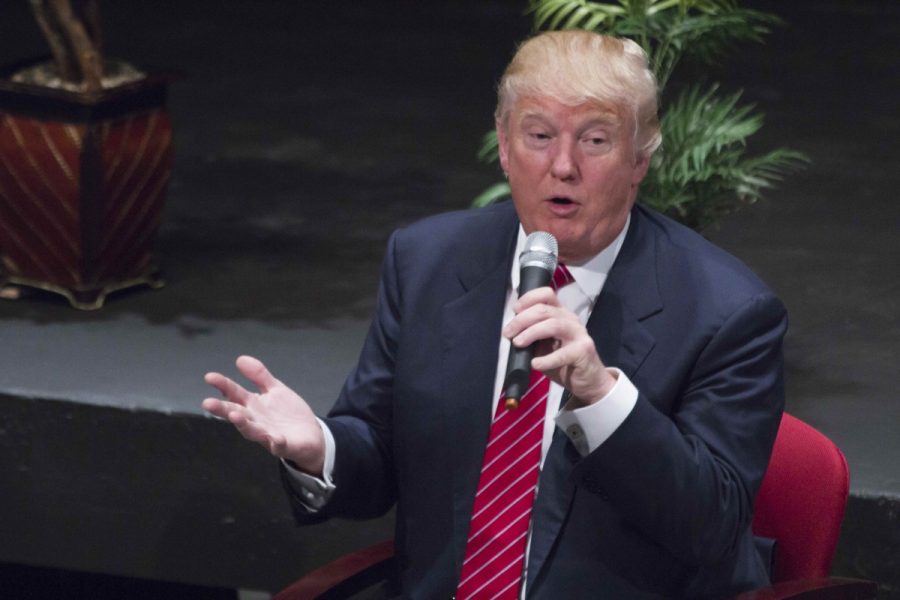 DES MOINES, Iowa — Defying all odds since the time he announced his candidacy in June 2015, business mogul Donald Trump, an undeniably controversial – and unstoppable force in the primaries – has won the presidency, beating Democrat Hillary Clinton.

A slew of scandals and aggressive rhetoric from both campaigns have dominated the headlines this election cycle, but the tone of angered Americans has risen above all else.

Trump held a huge lead early on until West Coast states gave Clinton a fighting chance. Before Election Day, a majority of news outlets had projected Clinton the winner – another example of Trump exceeding expectations.

Fueled by a promise to build a wall, referring to securing America’s border with Mexico, a shift against political correctness and an overarching theme to “Make America Great Again,” Trump has swayed the silent majority from the beginning.

In the primary, where at one point 17 Republican candidates populated the field, Trump rose above all with his unwavering support and no-filter approach to buckle down on immigration.

Trump won – as expected – among men and non-college-educated voters, while Clinton led among women and minorities.

Adding to a list of surprises, Trump won a few swing states that were crucial to his path to victory: Ohio, Florida, North Carolina and Iowa. No Republican has ever won the presidency without Ohio.

Trump touted Clinton for her years of public service in his victory speech early Wednesday, saying the former secretary of state has worked “very hard over a long period of time, and we owe her a major debt of gratitude for her service to our country.”

“Now it’s time for America to bind the wounds of division; have to get together,” he said. “To all Republicans and Democrats and independents across this nation, I say it is time for us to come together as one united people.”

Trump said his campaign was comprised of a movement that was made up of “millions of hard-working men and women who love their country and want a better, brighter future for themselves and for their families.”

Outlining a brief overview of a Trump presidency, he touched on the need to build America’s infrastructure: “We are going to fix our inner cities and rebuild our highways, bridges, tunnels, airports, schools, hospitals. We’re going to rebuild our infrastructure, which will become, by the way, second to none. And we will put millions of our people to work as we rebuild it.”

“We will also finally take care of our great veterans. They’ve been so loyal, and I’ve gotten to know so many over this 18-month journey. The time I’ve spent with them during this campaign has been among my greatest honors. Our veterans are incredible people,” he added.

Though Clinton did not give a formal concession speech as soon as Trump was projected the winner, she did call the president-elect to congratulate him on his victory in what Trum campaign’s manager Kellyanne Conway called a gracious exchange.

President-elect Trump visited Simpson College last April, flirting with a presidential run at the time. Rather than focusing on education as expected, Trump centered his speech around his personal experiences as an entrepreneur, the workforce and America’s infrastructure.

He also indicated the Department of Education doesn’t play a huge role at the federal level, a sentiment shared among fellow Republicans.

Trump also infamously said college students would have a better chance of getting a job if they studied business rather than humanities.

It was a good night for Republicans and incumbents in Iowa.

In the House, all Iowa representatives won their re-elections: Republicans Steve King, David Young and Rod Blum, and Democrat Dave Loebsack. With Tuesday night’s victories, Republicans gain a majority in the House.