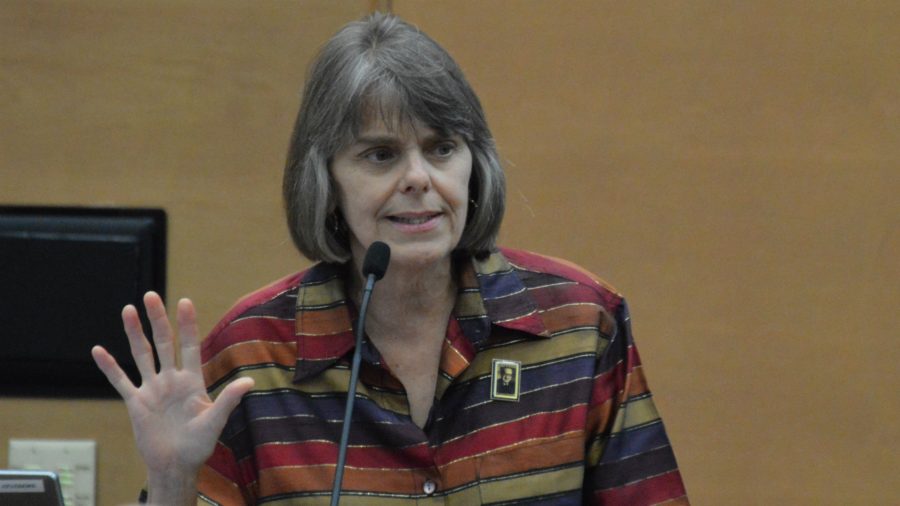 by Ashley Dalsing, Special to The Simpsonian

On Sept. 21, students, faculty and staff of Simpson College listened to Mary Beth Tinker speak about her part in the monumental Tinker v. Des Moines case and compared the First Amendment issues she experienced to those occurring today.

Tinker said she grew up in the church where her father was the pastor. Her father had always preached love and peace for the world. When her dad saw African-American children weren’t able to go to the swimming pool in town, he stood up for them and demanded they have rights to the pool.

For standing up for what he believed in during time, the Tinker family was kicked out of Atlantic, Iowa, for not conforming to ideals and taking an unpopular stance in the eyes of the community.

As the Vietnam War began taking place, Tinker and her brother decided to protest all the violence, hate and killings taking place they should wear black armbands to school.

There were 50 students at Roosevelt signed up to wear the black armband to school. A student reported the information through the school newspaper, resulting in the principal finding out and banning the black armbands on school grounds.

As the number of students who wanted to wear the armbands at school decreased, Tinker contemplated she should wear the armband in protest of the deaths of both sides in the war.

“I liked rollerblading and slumber parties. I didn’t want to get in trouble at school,” Tinker said.

However, the next day Tinker would change her life and encourage others to take action on the events taking place in 1969. She mustered up the courage to wear the black armband to school.

Although she was immediately sent to the principal’s office and took off the armband, it’s what happened afterward what made the lasting impact on the country.

Tinker and five other students were suspended from school. Tinker and her family attended the school board meeting to negotiate a way out of the suspension.

As the school board ruled the students had to serve their punishment, the Tinker family moved the case forward to the Eighth Circuit Court of Appeals, yet they lost the case once again. They hired Dan Johnston as their lawyer, who did some digging and found the school was practicing so-called viewpoint discrimination in this case, which is an appeal to the Constitution.

“The school had no problems with students expressing themselves as long as the school agreed with the form of expression,” Tinker said.

The Tinkers had found their case. The case was chosen and deemed important enough to be decided by the Supreme Court. The court receives 10,000 appeals a year and only picks 70 of those cases. With the Supreme Court, they succeeded and won their case.

Tinker explained it wasn’t about winning, but it was about taking action, even if it’s the unpopular thing to do or it’s an opinion no one may agree with.

To this day, Tinker is a pediatric nurse in Washington D.C., and she travels on her Tinker Tour to schools across the country to educate students on their First Amendment rights and to take action.

“I had a seventh-grader come up to me at one of the schools I was visiting while on my tour and said she didn’t like what she was seeing when she turned on the news,” Tinker said. “I told her, think of something to do about it because there is always something you can do.”

Students like senior Mallory Dirks were inspired by her words.

“I thought this forum was very timely with all the protests going on and how everyone is reacting,” Dirks said.

If you want to learn more about Tinker or keep up with her tour, check out tinkertourusa.org, follow @tinkertour on Twitter or email [email protected]