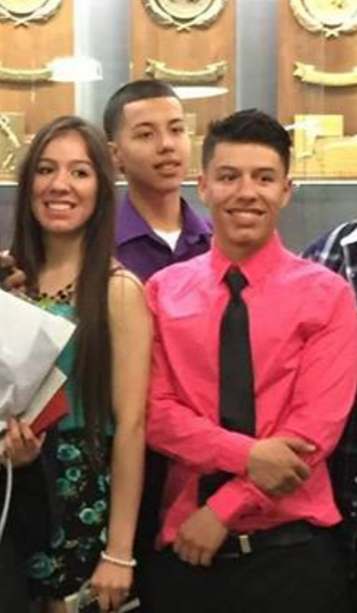 After receiving the worst phone call of her life, all Carina Gonzalez seemed to notice as she packed her bags for home were the amount of black clothes she owns.

Gonzalez’s older sister called to inform informed that their 19-year-old brother, Juan, had been shot in their hometown of Chicago.

But when Gonzalez made it home from her flight, she quickly learned that the news of her brother being shot had taken a turn for the worse.

After leaving work around 10 p.m., Juan had driven to an ATM to deposit his check. He stepped out of his car and was shot twice. By 10:20 p.m., he was rushed to the ER, and the man everyone knew as a happy, motivated, loving and responsible individual became a memory.

“I was going home hoping to see my brother in a hospital bed at least, you know, but no, he was already gone,” Gonzalez said. “I still had hope that I was going to see him walk through those doors.”

The day after his death, Gonzalez knew it wasn’t going to be easy.

“We looked exactly alike, so when I got home that Friday morning, I couldn’t look at myself in the mirror and not see him,” she said.

She spent the next two weeks with her family and helped plan the funeral, which was packed and paid for by Juan’s boss.

Gonzalez said that her brother was working to pay off his car and had plans to go back to school. His goal to further his education encourages Gonzalez to continue working hard on her studies in college.

“Knowing that he wanted to pursue an education and continue gives me more motivation to finish mine and do it for him,” she said.

Not only is Gonzalez taking 18 credits this semester, but she’s also involved with several extracurricular activities, including being a basketball manager, president of Living the Dream, vice president of Latinos Unidos and holding two positions in Sigma Lambda Gamma.

Although these activities are distractions to keep her mind off the tragedy, she tries her best to think about the positive memories she had with her brother. When she can’t think straight or type, she views pictures of her brother to help her stay concentrated.

“I don’t want it to seem like I’m just pushing it away and making it seem as if it never happened because I’ve been told, you know, you have to have those moments to think about it, and I try,” Gonzalez said.

Ever since she returned to Simpson, Gonzalez continues to notice adjustments she has to make in her life, even the little things such as filling out an application for a scholarship.

“I had already clicked living for all my siblings, so just to come back and do that little change was really, really hurtful,” she said. “You don’t want to think about that.”

While growing up, Gonzalez spent a lot of time with her brother. They did martial arts, played soccer in the alleys, jumped fences, played basketball, swam and did several other activities together.

“He taught me the value of myself,” Gonzalez said. “He was as happy as anyone could be, and that’s what counts.”

To help her handle the stress of college on top of a family loss, Gonzalez continues to visit a counselor and receives tips on how to focus.