14 years of life, time and innocence behind bars 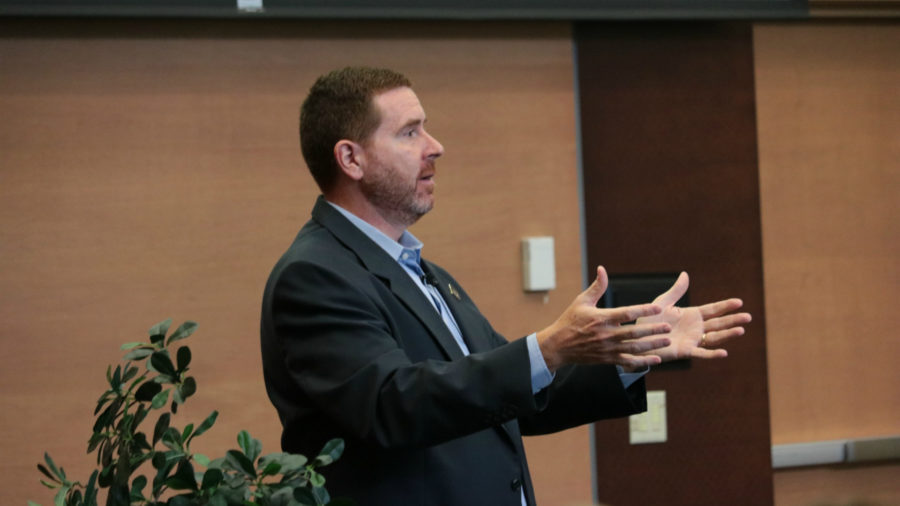 by Ashley Dalsing, Special to The Simpsonian

Imagine a picture-perfect day. But suddenly, police cars swarm your house, sirens blare and the entire neighborhood runs out from their homes to see what the commotion is about.

Officers kick down the door and demand you to place your hands behind your back, shouting that you’re under arrest for murder.

You shout at the top of your lungs, “I’ve done nothing! How is this possible?” to the careless officers dragging you out of the house and into the back of the police car.

At this point, innocence doesn’t matter to the officers or to the justice system. The process and procedures currently in place, DNA testing, eyewitness testimonies, interrogation and the trail will ultimately determine your fate.

Simpson College students, faculty and staff gathered in Hubbell Hall on Sept. 7 to learn more about the wrongful convictions in the American criminal justice system.

Speaker Brian Farrell, co-founder of the Iowa Innocence Project and professor of human rights and international law at the University of Iowa, painted a vivid picture with the daunting story of Jack Marion’s wrongful conviction and death sentence.

Marion, of Gage County, Nebraska, was planning to travel to Kansas with a friend, John Cameron, to pick up work with the railroad systems. Marion ended up staying back while Cameron went ahead on the trip.

A few days later, a body in Cameron’s clothing was found with bullet wounds to the head. Immediately suspicion was directed to Cameron’s longtime friend, Marion. He was eventually convicted of the murder of Cameron and was immediately sentenced to death. Cameron showed up in town after it was too late.

“When you hear about wrongful convictions as such, society begins to lose trust in their own criminal justice system,” Farrell said.

Farrell’s presentation centered around the fact that accuracy and solid fact-finding is being replaced by new procedures within the criminal justice system.

“We tend to forget to ask ourselves, ‘Did we get it right?’ It’s about displaying humility and knowing it’s OK to be wrong and to start back at the beginning,” Farrell said. “When an innocent individual is wrongfully convicted, the actual perpetrator is left roaming the streets.”

According to the National Registry of Exonerations, an attempt to reverse the crime conviction of an individual through demonstration of innocence or flaw of conviction, there are 1,878 cases in the U.S. alone.

The 1,878 individuals are pleading innocent of a crime they believe they were wrongfully convicted of.

“There are significant issues within our criminal justice system and many of those stem from not giving high priority to protecting the rights of indigent defendants,” said Marilyn Mueller, professor of management at Simpson College. “In several states, there is a lack of funding. However, Farrell was effective in pointing out several factors come into play, not just lack of funding.”

Wrongfully convicted individuals spend an average of 14 years behind bars for a crime they didn’t commit. This is due to numerous factors such as false confessions, incentivized witnesses, government misconduct and bad defense lawyers, to name a few.

Cue the work of the IIP, which is a nonprofit organization seeking to prevent wrongful convictions in the state of Iowa through solid case investigation and working to improve the integrity of Iowa’s criminal justice systems.