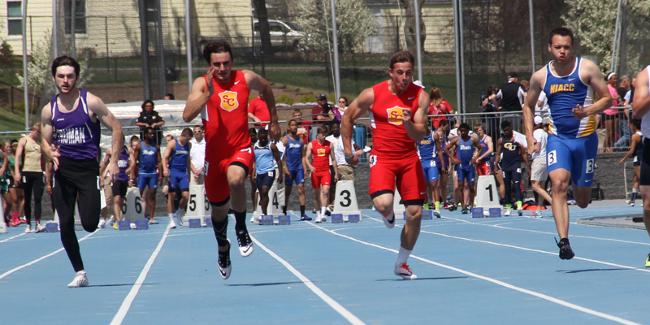 DES MOINES, Iowa – The Simpson track and field teams turned in five, top-five performances to highlight the final day of the Jim Duncan Invitational on Saturday.

Facing a strong headwind, Simpson sprinters didn’t run blazing times but fared well in the talented field nonetheless. Dylan Kalinay turned in the top individual effort, placing third in the 110-meter hurdles. The 4×100-meter relay also placed third, putting up the No. 2 time in the Iowa Conference in the process.

Kalinay ran the hurdles in 15.50 seconds, the top Division III finisher in the field. He ran in the third heat, which faced winds twice as strong as the second heat. Winner Jimmy Evers and second-place Jordan Fields ran in the second heat.

Prince Krah, Chase Wetterling, Kirk Wicks and Ryan Sarver ran the 4×100 relay in season-best 42.37 seconds. Wetterling, Wicks and Krah joined Matt Pearson to place sixth in the 4x400relay, which finished in 3:21.39, currently the No. 3 time in the conference.

Simpson will have a split squad this week. Multi-event athletes will go to the Kansas Relays in Lawrence, Kan. while the rest of the team will go to the Dutch Open in Pella, Iowa on Saturday, April 23.