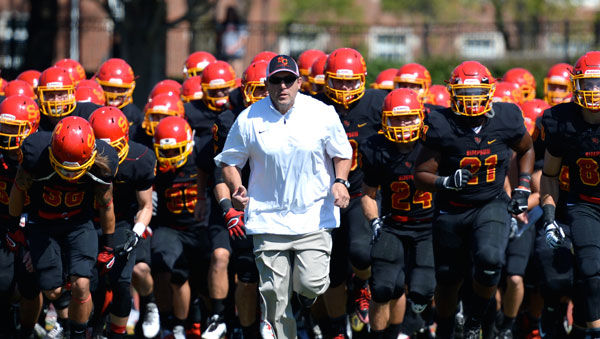 A year after reordering the coaching staff with the addition of offensive coordinator Jeff Judge in place of Joe Beschorner, the Simpson football team undergoes another coaching transition after the unexpected resignation of head coach Jim Glogowski, as announced by Director of Athletics Brian Niemuth earlier this month.

“I think it was a surprise,” sophomore quarterback Caleb Frye said. “Nobody thought that this would happen. It actually shocked me. A lot of guys, including myself, saw him as not going anywhere. It seemed like Simpson was home.”

The 31st head coach in Simpson football history, Glogowski announced his resignation to the team privately in an impromptu meeting days before a standard offseason meeting.

Glogowski went 37-43 in eight years in Indianola, finishing a tenure-best 7-3 twice, most recently in 2013, and will move on to join Beschorner as interim defensive coordinator at NCAA Division II Minnesota State Mankato.

The new role unites Glogowski with a slew of connections he acquired as a student-athlete at South Dakota State University, bringing him into a program that made the Division II Tournament before being eliminated in the first round by Emporia State last year.

The decision wasn’t an easy one for Glogowski, a coach who exerted great fire from his coaching on the sidelines, recruiting and even drudging treadmill workouts at the Simpson fitness center.

“I’ll miss being on the sidelines at Bill Buxton Stadium, but I won’t miss that the same way that I’ll miss players, coaches and the relationships with people here,” Glogowski said in a press release.

Frye, who will not be as heavily affected as quarterback, considering Glogowski focused primarily on the defensive game planning, still believes the team will mature in what will be a busy offseason for the Simpson football team.

“I think the biggest thing will probably be getting over this hump,” Frye said. “I think we will grow as a team. I think we will respond well. I thought we had a really good team on the offensive side, and with Judge the offense isn’t going to change much.”

Recruiting is key in college sports, and with his departure, that effort will be made slightly more difficult for Simpson in the offseason, putting a heavier workload on assistants. A job search has begun immediately in the effort to sign a new head coach, though an expected hiring date has not been released.

Simpson returns a large nucleus in the skills positions on the offense and throughout the defense, leaving a lot of players who will miss Glogowski and have to adjust to a new coaching style this fall.

“I think some guys are upset because they don’t have him as a coach anymore, not upset because of his decision,” Frye said. “It was a really hard decision and he told us that. I’ll miss his drive and passion. I don’t think there was a day when Coach Glogowski didn’t bring his fire.”

Simpson will play six road games in 2016 and four at home to accommodate the addition of Nebraska Wesleyan as a new member to the Iowa Conference.