Smith: Home behind the plate, 4-year stretch of durability 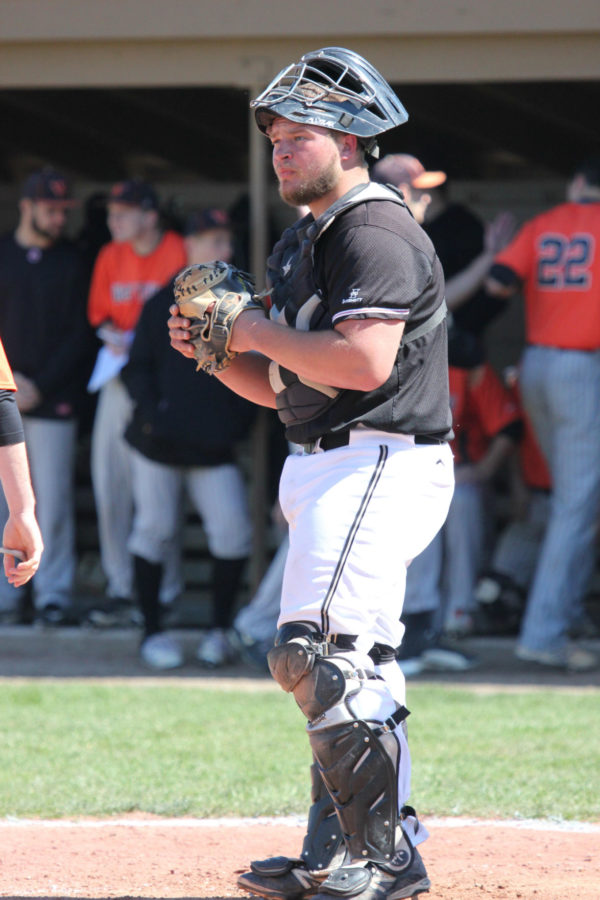 Senior catcher Bud Smith could be a spokesperson for Nike because he just does it.

Smith has spent over 100 games behind home plate for Simpson baseball and plans to catch over 20 more.

One-hundred games are a lot of wear and tear on the legs and knees, but Smith keeps going without complaining.

“I just love the mentality you have to have, the toughness that is needed, all the people you get to support and the being a part of a group of good guys.” Smith said.

Besides being good at baseball, Smith is doing something he loves.

He said the key to being good is showing up and giving 100 percent every day.

While Smith said he likes most parts of catching, his favorite part is blocking pitches in the dirt. He said it is a lot harder than it seems and most catchers are not good at it.

“I’ve always had this feeling about Bud that he would never get sick, never get hurt and never feel pain,” senior pitcher Brock Borgeson said. “He seems to be almost immune to everything. (He’s) one of the most durable humans I’ve ever come across.”

Borgeson and Smith were roommates on road trips for three years and have become close friends through baseball.

“He’s the type of guy you’d watch ‘Ridiculousness’ with until 3 a.m., as he takes a dip and spits it in his Monster can,” Borgeson said.

Smith was able to catch 100 games because he is good at what he does.

He hits for power, throws harder than anyone on the team and is able to bring borderline pitches back into the strike zone.

“I played with two Division I catchers in high school, one who went to Western Kentucky University and the other at Navy,” Borgeson said. “Bud is better than both of them. He is a better catcher defensively, has a stronger arm and can absolutely mash if he gets a hold of a pitch.

“I tell this to everyone and am not embellishing. He has Division I talent and could even play professional baseball, I believe, Borgeson said.”

As Smith finishes his senior season, his future with baseball is unknown.

Borgeson thinks he could play professionally due to his skill and strength, but no matter what happens, baseball will always be a part of Smith.