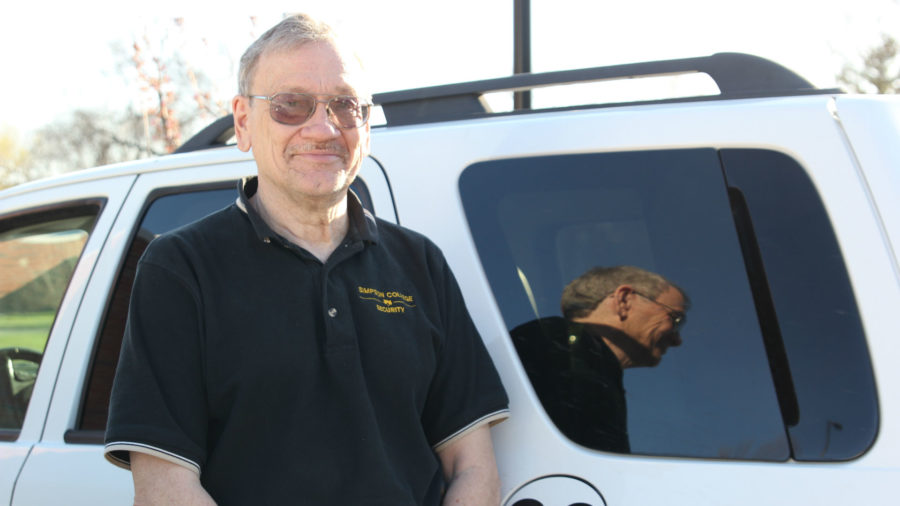 He has also gained a great reputation around campus as one of the students’ favorite staff members.

“Rus is the absolute best,” junior Austin Olsen said. “I know I’m not just speaking for myself when I say that Rus’ work, and the work of campus security in general, is sincerely appreciated.”

Rivers started his position here at Simpson College in May 2005.

“I’m going on 12 years now,” Rivers said. “I used to be a medic for the fire department, so I love helping students who are in need.”

Beyond parking tickets and escorts around campus, many students don’t know the role that security plays.

“Basically, what we do is we have schedule lock-ups. At certain hours, we lock up certain buildings,” Rivers said. “When we aren’t doing that, we drive around campus and make sure it’s secure. We answer all types of calls, like medical calls, assistant calls, escorts if students need to go from the library to Clinton.”

“If students can’t get their cars started or if they lock their keys in their vehicle, we are able to help them,” Rivers said. “We get a rise in calls during the wintertime, especially when the students have cars that are buried under heavy snow.”

Part of what makes the job so enjoyable for security is the relationships that are formed throughout the years.

“Last March I had neck surgery and was out for six weeks,” Rivers said. “I had past and current students send me get well cards and presents. I received many phone calls from students wanting to know how I was doing. This is what makes me love my job and love the students at Simpson. They are my second family.”

Campus security has made such an impression on the students that students will keep in touch long after graduating and even invite them to their weddings.

Contrary to popular belief, campus security is far from a dull job.

Over the 12 years that Rivers has been working for security, he has encountered many exciting and fun evenings.

“Normally, a crazy night is when parties are going on around campus. A few years ago, Simpson had a ‘naked mile run’ out on the football field,” Rivers said. “That’s comical because they just run around the football field without clothes on.”

“The idea that students can’t call security because they’ll get in trouble is a myth. We are here for their protection and safety on campus,” he said.