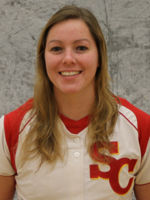 As a then-freshman, senior catcher Tori Haag wanted to help the team out any way she could.

But she was selling herself short.

Over spring break, Haag set the Simpson softball record for doubles, just became the career leader in hits with 182 and is 11 RBI short of the record of 111.

Just like Bud Smith for the Simpson baseball team, who started his 100th straight game at catcher in a game against Dubuque April 8, Haag has been a mainstay in the Storm lineup.

A student in the game and in the classroom, having earned CoSIDA Academic All-District First Team accolades in 2015, Haag is in the perfect position as a catcher to impart knowledge into the game at arguably the most cerebral position on the diamond.

Despite the intellectual side, Haag’s intensity and lead-by-example approach has lifted Simpson over the past four years.

“Tori takes control on the field and the team follows,” senior pitcher Abbie VanVleet said. “I’ve never had a catcher who takes control of the game like she does. It makes it easier as a pitcher knowing that the only thing I need to worry about is throwing the ball to her glove.”

Her leadership as a catcher and hitter has made Simpson one of the most well-rounded teams in the IIAC. Simpson is second in team ERA (2.29), third in team batting average (.329) and first in home runs (28).

Haag herself is in the top five in nearly every statistical category.

Haag has done so looking for the pitch in, considering herself a dead-pull hitter throughout her career. She’s been known to swing at pitches that appear to be coming at her hip, only to hit a screaming line drive down the line or foul.

The Waukee native could have been a Central Dutch but decided on Simpson in part because of her brother, Ted Haag, who had an impressive career as linebacker for the Storm. Some of the intensity he showed on the football field is evident in Tori Haag’s style of play.

“We both take sports way too seriously, and both are weirdos,” Tori Haag said. “It came down to Simpson and Central, but I was always thinking Simpson. I think he is really happy I came to Simpson to sort of continue on that Haag legacy.”

Tori Haag will graduate with a degree in global management April 30, the same day Simpson is scheduled for a crash course with nationally ranked No. 2 Luther (27-1, 4-0).

One of Tori Haag’s high school teammates at Waukee is the leadoff hitter at Luther, but the April 30 showdown will be anything but a reunion.