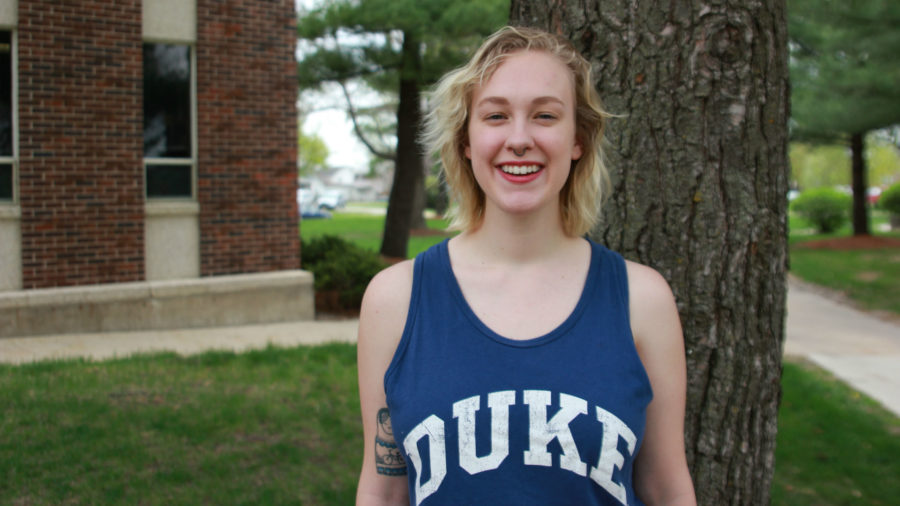 From traveling the world to making priceless friends and mentors to meeting her soon-to-be husband, senior Tricia Ingram has become a poster child for what many look for in a successful college experience.

The Altoona native visited Simpson College during her senior year of high school with ideas of tackling the issue of sex trafficking.

“I really wanted to go into social work,” Ingram said. “But Simpson didn’t have a specific major for that, so a sociology professor convinced me to major in sociology with a minor in social work.”

This spring she will be graduating with a major in sociology as well as minors in women’s and gender studies and applied ethics.

“I love Simpson,” she said. “I love that it’s small, and that I know all of my professors and that they know my name as well. I’ve really taken advantage of all the opportunities Simpson has given me, which has allowed me to travel a lot.”

During her four years, Ingram has traveled to domestically to Florida, Illinois, New Hampshire, New York, Colorado, New Jersey and Minnesota, as well as internationally to Senegal, Thailand, Laos and Myanmar.

“Thailand was obviously my favorite place I’ve traveled,” Ingram said. “We took classes at Chiang Mai University in northern Thailand at the base of a mountain. I also had an internship at an orphanage where I taught girls English.”

She said teaching English proved to be a harder task for Ingram than she had originally anticipated.

“I think the only thing I knew how to say when I got there was ‘Hello,’” she said. “Luckily, people speak enough English for you to get around, and you pick it up pretty fast when you’re thrown into their culture.”

In addition to travel opportunities, Ingram was lucky enough to have found the love of her life, Brian Williams, during her sophomore year.

“I was an intern at the chapel and Religious Life Committee does a welcome worship at the beginning of every school year,” Ingram said. “I was sitting with my roommate, who knew Brian from high school, and so I yelled ‘Brian, Maureen knows who you are,’ across the room. And that was the first thing I ever said to him.”

To add the perfect Nicholas Sparks finish to this relationship, they will be getting married in Smith Chapel — where they first met.

Traveling and friendships haven’t been the only large influences on Ingram.

Professors have also had a large role in shaping who she has become.

“Mark Freyberg is my adviser, and he makes me feel like a rock star. I love him for it,” Ingram said. “To have people behind my back like that is so valuable so I’m incredibly thankful for him. A. Wolf has made me the scholar that I am today and has opened me up to feminist theories that have really shaped my perception of the world.”

After graduating, Ingram, alongside her fiancé, will be moving to North Carolina where they will both be pursuing a master’s degree at Duke University. Tricia plans to study interdisciplinary justice with a focus on women.

Her ideal future involves working for nonprofit organizations to help educate people about women’s empowerment and sex trafficking while traveling the United States with her soon-to-be husband.