Lumberjacking: The epitome of sportsmanship 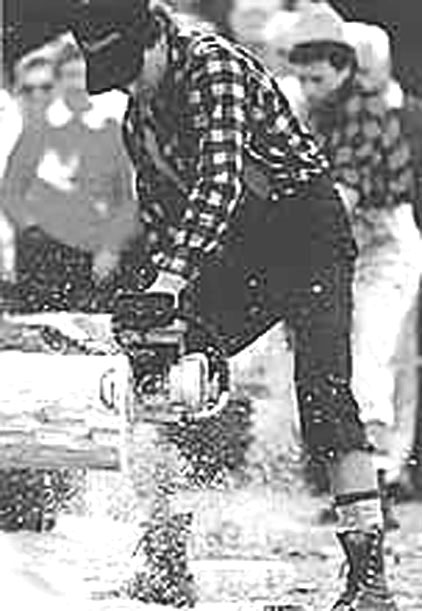 Above all else, America celebrates sport. Professional athletes are paid obscene amounts of money to do something that they’ve done as a hobby all of their lives.

Timbersports, or lumberjacking, combines all the elements that should be found in pure athletic competition. Strength, agility, endurance, skill, and technique are all incorporated in this raw display of sport.

Lumberjacking embodies what the Greeks sought to honor in their initial Olympic Games. It’s a lot like Greco-Roman wrestling: the daunting task of defeating a physically tough opponent using pure strength and endurance. Except with axes.

The STIHL Timbersports Series is the organization through which lumberjacks are brought together to compete for glory and a new pickup truck, something they can use on the jobsite.

They hold competitions throughout the year in which lumberjacks earn a running tally of scores, vying for a berth to the 12-man championship at the end of August.

There are six disciplines in which the competitors participate. They vary from the traditional Standing Chop, an emulation of simply chopping down a tree with a man and his axe, to the Jumping Board.

Perhaps the most complicated competition, the Jumping Board consists of an 18-foot trunk, three springboards of about 8 feet in length, a woodsman and his single-bladed axe.

The lumberjack makes a small series of cuts in the trunk at about 6 feet high, inserts a springboard, jumps on it and proceeds to repeat the process again, except on a higher level.

The competitor must then chop a solid block at the top faster than his opponent. This event requires skill, balance, technique, strength, and speed that can only be found in the most hearty of men.

Certainly, Timbersports deserve the classification of a sport. If NASCAR is let into this category, then to deny lumberjacking would be a degradation of athletics.

Lumberjacks are purer athletes than racecar drivers, golfers, baseball players, bowlers, the competitors in the “hobby sports” (pool, ping pong, Frisbee golf, etc.), and participants in the rest of the sporting world.

Watching Timbersports invokes a primal urge deep within me to run into the woods, kill a bear and bite the head off of a rabbit. It seems barbaric, but the driving desire behind the sport is to dominate the formidable opponent that is Nature.

Chopping down a tree satisfies a deep-rooted masculine instinct that can’t be done on the basketball court, in the batter’s box, or even on the football field.

It’s not my intention for men and burly women everywhere to go out and clear the forests of the worlds. I am merely trying to honor an underrated and mocked sport that is pure in its intention and delivery.

These competitors don’t have different day jobs. This isn’t a hobby to them. They cut down trees for a living.

Timbersports gives them an opportunity to exhibit their strength and skill to other rugged outdoorsmen, who give grunts of approval to these physical specimens out of respect for a deeply fraternal bond that only they share.

Celebrate the lumberjack, the firefighter, and the soldier: embodiments of masculinity. Honor those who do things most men want to but can’t do.

Next time you’re flipping through channels on a Saturday afternoon and come across one of these rare competitions, stop and watch with an open mind. Appreciate the raw power it requires to do what these lumberjacks do.

Learn more about Jason Wynyard, the 4-time defending champion from New Zealand, as well as David Bolstad, his fellow countryman that dethroned the giant. Gain an understanding of this noble sport, if not a liking.

I salute you, lumberjack. May your blades always stay sharp and the trunks always fall away from you.