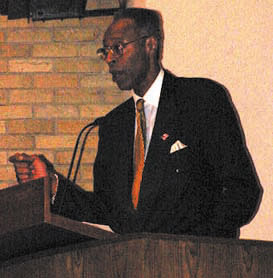 Dr. Martin Luther King Jr. spoke in 1963 about his dream that all men and women be treated as equals.

Junior Carrie LaGree has a dream that Simpson College will one day observe Martin Luther King Day with the respect that she believes is due to the civil rights leader. LaGree says that an hour-long forum is not enough.

“I think the day should consist of no classes, lots of discussions, great speakers and interactive Forum events. This will raise consciousness of his life. That is real respect,” LaGree said. “The school could have something like a unity week. Professors could make the week part of the curriculum in the class. This way students actually get something out of the celebration.”

According to R. Kevin LaGree, Simpson College President and Carrie LaGree’s father, looking into such changes is not out of the question.

“I am open to exploring that and I know the dean of students is too,” said President LaGree.

According to Clarence Key Jr., executive director of the Iowa Board of Parole and Simpson graduate, over 50 percent of corporate companies in the United States do not consider the civil rights leader’s birthday a federal holiday. Key gave the Martin Luther King Day address at Simpson on Monday afternoon.

Having transferred to Simpson from Emory University in Atlanta, Carrie LaGree said she was shocked and embarrassed to find that Simpson does not observe the day like many other schools and businesses around the country.

“In the South, Martin Luther King Day is a universal holiday. I was shocked to see that this day was not a holiday for the school,” LaGree said.

LaGree also said the message of not celebrating Martin Luther King Day is like saying the community doesn’t feel a need to understand diversity or race issues.

“Thinking Martin Luther King Day is not an important day to every person is like saying we don’t need to raise race issues. The school gets the Monday after Easter off. That delivers the message to me that if you’re white and Christian, this school is for you,” she said.

Freshman Dru Williams said he has similar feelings to LaGree’s.

“Being black, I think that having classes on this day doesn’t show much respect toward Dr. Martin Luther King Jr. [Simpson] doesn’t have school on Easter or Christmas, granted this isn’t as important as the birth of Christ, but Martin Luther King Jr. is important to those of us who were helped by his actions. A lecture in the middle of classes doesn’t sound like due respect to me,” Williams said.

In Key’s lecture, he said that King represents the most significant change in the last 50 years.

In an interview following Monday’s speech, Key said, “I think the United States needs to be shut down on this day. I think Simpson should have the whole day off to pay due respect. He wasn’t the entire civil rights movement but he did play a significant part, and we need to commemorate that.”

Within the Simpson community, there are mixed feelings about the level of respect that is due to King and whether there should be a change in the way Simpson honors the civil rights leader.

“I have always found it odd that Simpson doesn’t take a full day off for Martin Luther King Day. Taking 10 minutes off of each class isn’t truly paying much respect to him at all,” junior Joe Wilson said.

“It is ridiculous and insulting to cut classes by a mere 10 minutes for a man who changed the United States and the situation for African Americans within this country. I am surprised that someone has not spoken up earlier about this situation,” senior Angie Reasoner said.

Other members of the Simpson community feel that the job of creating awareness of King’s life is not just the responsibility of the college.

“The college as an institution is doing what institutions can. We’re formally recognizing King and providing a forum for discussion of his ideals and courage,” said Mark Freyberg, assistant professor of sociology. He also feels individuals must take personal responsibility for “enacting his vision of justice and humanity.”

“Too often I think we absolve ourselves of this responsibility by ‘reifying’ racism, violence, poverty, etc., seeing them as omnipresent forces of nature beyond human control. If these injustices are an everyday presence, we can resist them in the everyday. All of us, literally, make history, every day,” Freyberg said.

Jon Benoit, associate professor of music, said that if Simpson were to cancel classes for a day, people would not necessarily devote the entire day to things that have connection with King or the civil rights cause.

“I think Simpson has adopted a good approach. By bringing in a guest speaker, Simpson encourages the community to devote an hour of quality time in contemplation of King’s legacy. Were Simpson to cancel classes for the day, I suspect most people, myself included, would devote the entire day to pursuits that have very little to do with King or with the cause of civil rights,” Benoit said.

This reflects a concern voiced by President LaGree in a cancellation of classes for the holiday. “If we had a day off, I am not sure that people would get involved any more than they do now. It would just be a day off of school.”

Carrie LaGree said she believes teaching the acceptance of diversity is one of the key focal points of celebrating Martin Luther King Day.

“The lack of diversity is why it is even more necessary for Simpson to acknowledge Dr. Martin Luther King Jr.’s birthday,” LaGree said. “Diversity awareness is the ultimate goal. Raising diversity is the key to a true liberal arts education.”