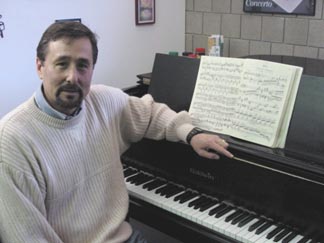 Professors in the departments of theater, music and art are finding time to accomplish achievements outside of the rewards classroom.

One such person is Ann Woldt, a lecturer in the theater department at Simpson College. While acting some years ago, she decided she wanted to broaden her horizons. Her agent at the time advised her to look into voiceovers for Radio Garage Productions in West Des Moines. She made a demo and she said “things took off from there.”

“Voice-overs are primarily when an actor lends their voice to a commercial, industrial film, cartoon, CD-Rom, book on tape, etc…,” Woldt said.

Because of Woldt’s position at the college, she is given flexibility and availability for voiceovers. Radio Garage also tries hard to work around her schedule.

Woldt’s voice is heard in several places. “I have done numerous projects for the State of Iowa, including narrating the video that is shown on the tour of the Governor’s mansion,” Woldt said. She is also the spokesperson for Hummel’s Nissan, DuPont, Brand Source, Maytag and many others.

During Albrecht’s travels for concert performances, he has been frequently asked about recordings of his music. “I wanted to have something to offer those interested people,” Albrecht said.

His first CD, “Ron Albrecht, Through the Years,” is a collection of various live performances over the last twenty years. “I dedicated the project to my dad, who has gone out of his way countless time to hear my performances,” Albrecht said.

His second CD project is with Iowa flautist Sandra Wacha, and will be available this spring.

His time invested in the projects has varied. The live CD production was a project he managed to complete at a recent sabbatical leave. The second CD was completed through multiple sessions this past winter.

“As far as the second CD project goes, Sandra and I somehow managed to squeeze time in for recording sessions last November and December on top of our busy lives,” Albrecht said.

“Through the Years” is available at the Simpson bookstore or through Albrecht.

Also finding time for outside work in the fine arts is David Richmond, assistant professor of art. There was recently a show in the Farnham Gallery in Mary Berry Hall that featured his photography.

“My concern is to portray familiar objects and events in ways that are unusual,” said Richmond.

With the demands of teaching and meetings during a semester, free time is limited. “I must make time to do art,” Richmond said. “It is a release for some inner thoughts or struggles that need physical form.”

Richmond’s work is for sale by contacting him directly.