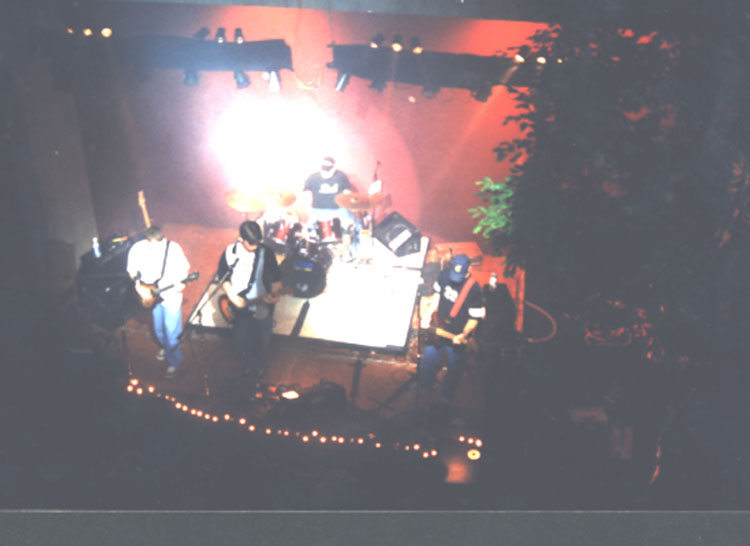 As one of the handfull of independent bands on the Simpson College campus, The Downstairs has found its niche and says it is focused on its fans.

“We play for the fans,” freshman lead singer Justin Kinkel-Schuster said, “I’ll play for anyone, anywhere.”

Since it’s start about four years ago, The Downstairs has played gigs in Cedar Rapids, Iowa City, Des Moines and the band’s hometown of Dubuque.

“A couple guys I’d been friends with since kindergarten kept saying, ‘Let’s start a band,’ so we started one out of boredom in my senior year of high school,” senior lead guitarist Craig Kaufman said.

Kaufman had his turn at singing lead vocals for a while, but Kinkel-Schuster was recently pushed up front as the band’s lead singer.

Kinkel-Schuster was approached by Kaufman earlier last semester year, when Kaufman asked him to jam sometime. Kinkel-Schuster accepted, and the first gig The Downstairs played with Justin was at the Underground. Immediately, something clicked.

“When Craig and I jammed, we found out we had the same musical tastes so we fit,” Kinkel-Schuster said.

Kaufman didn’t seem to take offense to being moved from vocals.

“I never intended to be the lead singer,” Kaufman remembers, “At the time [we began playing], I was the best singer out of the three.”

With a younger, newer member stepping into the limelight, questions arise about how the sound of the band will change.

“The music has changed because Craig had a deeper, harsh voice, and I’m a tenor and more poppy,” Kinkel-Schuster said.

But, fans agree that the decision to move around roles within the band is a good one.

“The sound will change, but I think putting Justin upfront and Craig on guitar will utilize their talents better,” sophomore Andy Baker said.

Kinkel-Schuster seems to have grown comfortable with the band, and in addition to singing, he is also experimenting with writing some material as well.

“[Kinkel-Schuster] has written some awesome mellow songs, something we didn’t really have before,” Kaufman said.

By pulling from many diverse influences, the band’s overall sound has stumped many when they are asked to define it.

Kinkel-Schuster cites some of his influences as being bands such as Weezer and Deftones, as well as some others. The Downstairs has become a big part of his life already, according to Kinkel-Schuster.

“Being in a band is great. I don’t know what I’d do if I couldn’t be in a band. Music is the way I express myself. It’s come down to; if I had to choose between playing music or studying, I’d choose playing,” Kinkel-Schuster said.

The Downstairs will be performing at the House of Bricks in Des Moines (across from Merle Hay Mall) this Sunday March 3, 2002 at 5:30 p.m. Tickets are available through Kaufman or at the venue.