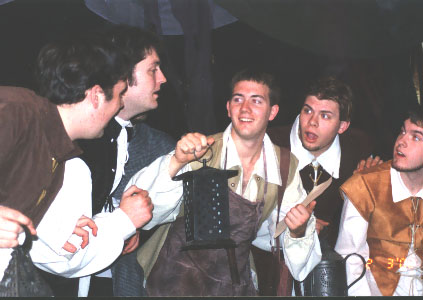 The opera is under the direction of Robert Larsen, professor of music. Larsen said that a couple of different factors led him to choose this particular production for performance.

First, Larsen said the opera was chosen with his students in mind. He said that there was a “great number of talented singers” this year. Additionally, Larsen said that this opera hasn’t been performed at Simpson since 1975, and he was “anxious to do it again.”

The story line is complex and unique. There are three levels, or mini-stories, within the opera: the controversy of the fairies, the quartet of lovers and the rustic, craftsmen and their desire to perform for the Athenian Duke and his bride.

Despite its complexity, the opera is a comedy. One student said the humor factor added an initial complication to the roles. “It is hard to play a comedian when you aren’t one,” sophomore Vista Kalipa said.

Kalipa said that the cast as a whole has become very good at relaying the humor that is essential to the show.

Although some students had copies of the music when they left for winter break, some did not. The performers began rehearsing together at the beginning of the semester and have been working very hard to prepare for this weekend.

The short amount of time for rehearsing wasn’t the only challenge that the performers faced.

“This is a tremendously difficult drama to perform in such a small space (studio theater),” Larsen said. “The actors are so close to the audience, and this opera demands space.”

“A Midsummer Night’s Dream” will be performed Friday and Saturday at 7:30 p.m. and again Sunday at 2 p.m. Contact the music office at extension 1637 for ticket inquiries.