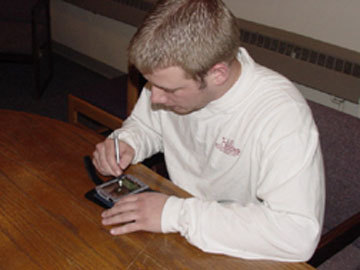 A growing number of technology-savvy students have found a way to organize their lives simply by using a device approximately the size of an index card.

A new wave of handheld organizers often referred to as “palm pilots” keep track of important dates, phone numbers and even allow students on the go to check e-mail from virtually anywhere.

Sophomore Scott Brant takes his handheld organizer with him almost everywhere he goes.

“I think it really helps you better organize your day in a way that the pencil and paper can’t possibly do,” Brant said.

Brant uses his organizer to work on spreadsheets, figure his gas mileage and work on documents.

Models today come complete with a cradle that makes it easy for users to connect to computers.

Junior Steve Horvath purchased his organizer not long after they appeared on the market.

“I’ve had my Palm 5x for a little over two years now,” Horvath said. “I use mine as an address book, date book, to read articles from the New York Times and cNet.com.” Horvath said that he can basically do anything from reading books to playing games on his handheld.

Organization comes at its price; $250 is not unusual for a base model and $600 for one with more options, sharper color displays and cellular phone capabilities.

Brant’s version is made by a company called Handspring Visor, a spinoff of the Palm company. Brant said these can be ordered on-line and are typically priced at about half the cost of the Sony and Palm models.

With newer models coming out almost every month, students may wonder if it’s worth spending their money now, as opposed to waiting for even more functional ones to hit the market.

Brant said he plans on his current handheld lasting him another four to five years. He also said he would hesitate to spend $500 on an organizer because of their fragility.

Horvath also does not see the need for replacement at this point.

“When I bought mine, there weren’t really any other companies [selling handhelds],” Horvath said. “I settled on the Palm 5x because of its lightweight, thin profile, and it was the newest model out.”

“The newer handhelds have better expandability and better software, but I’m happy with mine,” Horvath said.