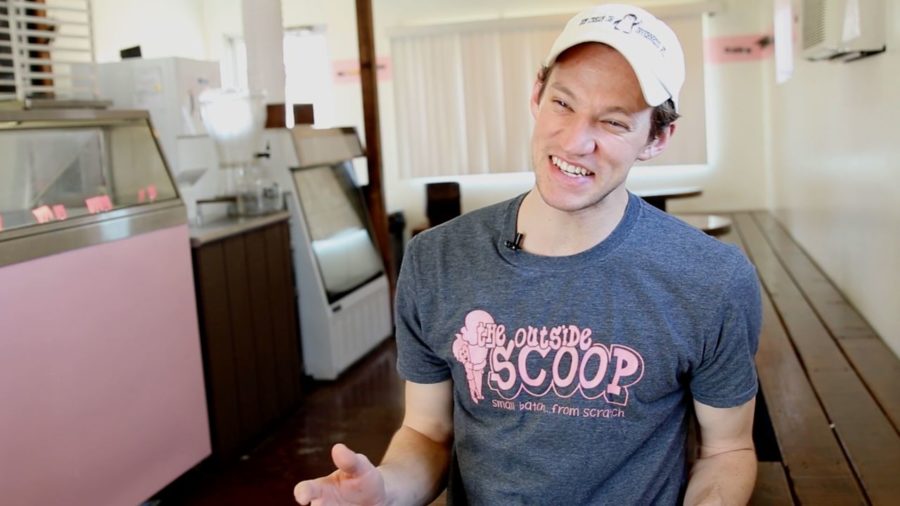 Here’s the scoop: Indianola’s most popular ice cream shop is owned by a 26-year-old Northwestern University graduate with a degree in biochemistry and who considered opera as a career.

Joe Doering started concocting sweet flavors in his mother’s kitchen before investing in a $5,000 freezer. When the time was right, he signed a lease for his brick-and-mortar space located at 602 North Jefferson Way that would later become known as The Outside Scoop.

(The name derives from the outdoor-only seating at the time, and “The Inside Scoop” was already taken.)

The recipe for his success isn’t so secret.

“So I mean, all of our products are made from scratch,” the Indianola native said. “We try to keep flavor profiles interesting.”

Seven years later, Doering has created over 60 ice cream flavors, from the classics, such as banana, strawberry, cookie dough, thin mint, pistachio and cake batter, to the unheard of, including maple bacon brittle, orange ginger and sweet corn.

She and her family said the small town, nostalgic feel of the shop keeps them coming back.

“I think it’s a really good ice cream place,” she said. “It’s my favorite one in Indianola. I don’t think I’ve talked to anyone who doesn’t like it.”

“We usually try to share each other’s kinds, so we know what’s out there because there are so many kinds,” said Jeff Blosser, of Indianola. “It’s just time to sit down and talk with the family and have some family time over some good ice cream.”

The signature pink truck cruises through the metro, which has recently eased food truck restrictions, attracting crowds of both young and old on spring- and summer-like days.

Even though many would consider him a successful young entrepreneur, Doering, who attended Simpson College for a short period, said making ice cream isn’t exactly his dream job.

Doering told The Des Moines Register last year he hopes to keep the business seasonal, as he dreams of traveling the world and performing opera.

When asked where he sees himself in five years, though, Doering responded, “I really don’t know. If I ever figure it out, I’ll let you know.”