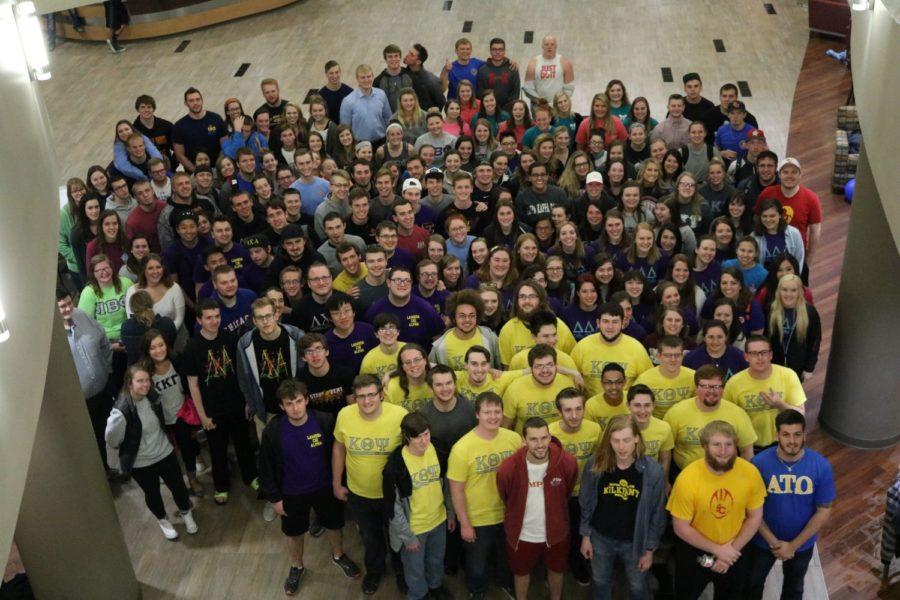 One of Simpson’s most-loved traditions is Greek Week, a weeklong event filled with contests, fundraising and a lot of fun.

It’s a week where anything goes and where every person in Greek life comes together to remind themselves what Greek life means.

This year’s events included traditional ones, such as Ultimate Musical Chairs and the Lip Sync Battle. This year’s surprise event was Philanthropy Wars.

The rules are that each Greek house must put up a chair in the Kent Campus Center and see how much money they can raise for their specific charity.

Changing the rules from last year’s Penny Wars, this year $1 equals one point. The house with the most points wins. The winner was Lambda Chi Alpha, by a close $1.

Lauren Beckman, a sophomore in Tri Delta and activities chairwoman, said she never intended to be in Greek life because she never fit the stereotype.

Once she got to Simpson, she said, everything changed.

“I see in life the bigger picture now,” Beckman said. “I’m more of a team player. I’m involved in activities. I realized that people notice what you’re doing, whether or not you want them to notice. I realized that other people, not just you, depend on you.”

Ultimate Musical Chairs, a favorite among students in Greek life, is like any other game of musical chairs – except for the fact that the chairs are placed randomly, not in a circle, and there are no rules on how someone can get a chair. Of course, the last person standing wins.

Taylor Harper, a freshman in Pi Beta Phi and chair of communications, has never known a semester without Greek life and elaborated her thoughts on Greek Week.

“It’s been very hectic but very fun,” Harper said. “It’s kind of cool to see how everyone mingles so quickly and easily, even though you might not be friends.”

She said her favorite event was Ultimate Musical Chairs, which she described as, “crazy but awesome!”

It’s a week to remind themselves, and the campus, just how much Greek life matters.

For Emma Schlenker, a freshman in Kappa Kappa Gamma, it became her saving grace.

“I had a really hard time adjusting to being far from home and was just desperately homesick,” Schlenker said. “KKG were the girls that had my back, rain or shine, every single day. I moved in this semester and every day they continue to show me the true meaning of being Greek and being a sister. They’ve become more than just my friends and turned into my entire support system and my family.”

“They’ve taught me the true meaning of strength, happiness even on the worst days and unconditional love for everyone around you,” she said.

Most people who are involved in Greek life will tell you something similar. Greek life provides others with a support system that even if you wanted to, you couldn’t get rid of, and if there’s one thing that any student needs in college, it’s that.

“Like most of my brothers at Lambda Chi, I didn’t come to college with the expectation that I would join a fraternity, and I didn’t even come in with a want to,” Rochleau said. “I came here, and the guys I got to know ended up being awesome and totally eliminated those negative stereotypes of the frats, and I was introduced to what a fraternity really is.”

Rochleau also wishes to give a special shoutout to the girls in Kappa Kappa Gamma who joined with Lambda Chi Alpha during the Lip Sync Battle.

Greek Week is just another week in this crazy life called college, and for Simpson students, it’s a chance to take a step back from schoolwork and remind themselves that Simpson, and college, stands for hard work, dedication, friendship and a passion for leadership.