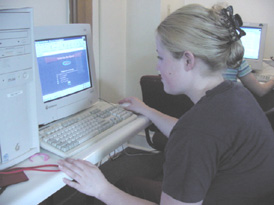 And the winner of the Campus Activites Board band selection is…

CAB is keeping tightly sealed lips about the results of who won the vote for your favorite band. Some might think of CAB as a 007 agent pulling some double secret operation in hopes of surprising the student body. Although unclear in the outcome to the students, sources say that CAB has indeed decided on a winner and is doing everything in their power to get them here on campus.

“As of right now the band chosen is what you call under wraps, top-secret, or strictly confidential,” said CAB President Kim Lamon. “We are even going so far as to not tell other CAB members. All I can tell you now is that, unfortunately it was not Ozzy Osbourne. However, we did get a winner and we have a runner-up,” added Lamon.

According to Rich Ramos, assistant dean of students and CAB supervisor, the reason for the secrecy is because they would like to confirm the performance date with the band first. “The break-down of the time table is this, most bands will not be looking at their fall tour until some time during the summer. As soon as we can we will put space in Cowles on hold if it is available and put in an initial offer for the band that was chosen. It is similar to buying a house in that we don’t deal directly with the artist, we deal with another person who deals with the agent who then talks over the offer with the band and then a decision is made,” said Ramos.

“The decision is either to accept the offer and the date, make a counter offer of either another date or price or both, or flat out refuse the date. All of these may be possible. From the time that the offer is put in, to the show date may be as much as three months, but may be as little as six weeks. It will be no less than six weeks. As for dates, right now anytime in the fall is open for us,” added Ramos.

Even though most students are ecstatic about a band of this magnitude coming, there is still speculation about where and how the band will perform.

“For shows of a larger nature, we will use Cowles and need pretty much the entire building. Specifically, we will need the fieldhouse and at least one of the classrooms from 8 a.m. until the show is over,” said Ramos. “Then as it grows from there, it will reach a point when we will close and secure the rest of the building until after the show is over. The only part of the building that will still be open will be the fitness center area,” said Ramos.

Lamon foresees events like this to become standard at Simpson College. “We do hope to make a big concert for up-and-coming bands a regular thing,” said Lamon. “Under our new constitution we have now started a ‘big events chair’ who will head up future events like this. This type of event seems to be fine within our expected 2002-2003 budget.”

Yet, in echoing support with the budget, Ramos stressed that costs can vary with each band.

“It is really a balancing act when you’re dealing with the budget,” said Ramos. “It can be anywhere from as little as $7,000 to upwards of $20,000 but it ultimately depends on the band. For example, if a band costs $5,000, we will have to hire a company to bring in sound and lights, which will cost somewhere around $4,000. In addition, we will also have to rent staging, barricades, stagehands, security, and possibly even catering. There are also a ton of other little things that really add up in a hurry,” said Ramos.