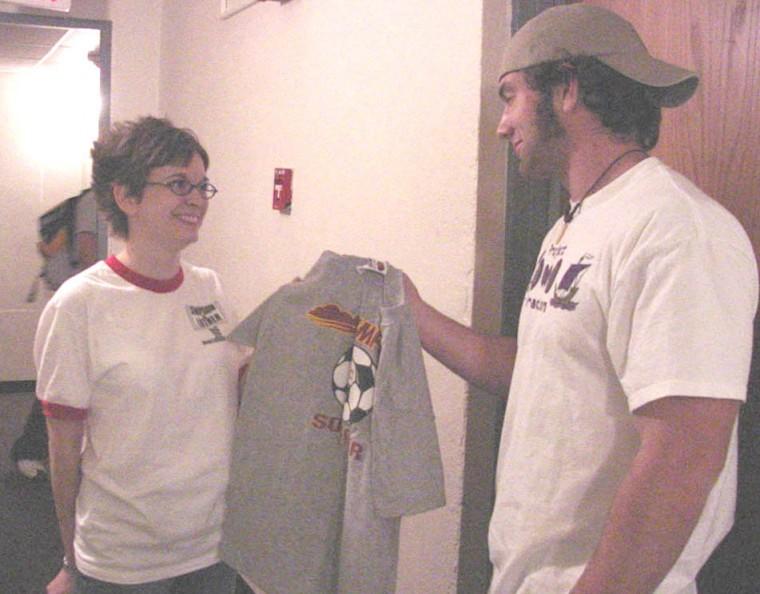 Fund raising is something that all athletic programs are faced with including Simpson College. Yet, a new idea this year proved to be the start of a new and exciting fund-raising opportunity.

At Simpson, coaches have done a little bit of everything to raise money for their teams. Some of them put on clinics for high school and younger aged children, such as the one the men’s basketball team puts on every year.

Other teams prefer the more straightforward approach of selling T-shirts. The soccer and volleyball teams have both been selling shirts to family members and classmates this fall.

Either way, the money made by doing these types of things goes right back into their particular program and can be used the way that the coach of that particular sport chooses.

Take for instance the men’s basketball team. The team runs its annual clinic to help raise money for the trips that it takes every other year. The guys on the team are responsible to get kids to come to the clinic so that they do not have to shoulder as much of the financial burden themselves.

The athletics department at Simpson College also does its fair share of fundraising. This year the team used an approach that it had never used before, and it proved to be a great success.

The Simpson College athletics department hosted a golf outing by inviting alumni, local individuals and Des Moines area businesses to participate in a fun and profitable round of golf.

According to Athletics Director John Sirianni, there were around 75 golfers and another 25 to 30 people who showed up for some of the other events that took place throughout the day.

The event started with a two person best-shot tournament that included various contests such as closest to the pin and a hole-in-one game. There was also a championship flight of golfers that competed as well. The rest of the day included a raffle, a silent auction and a live auction. The day was capped of with a dinner for all those who took place in the fundraiser.

Some gifts from the raffle and auction that were to be given to lucky participants were things such as a Balloon ride, a weekend in Kansas City, a Kip Janvrin Olympic Jersey, pitching wedges with Storm logos on them and a Nick Ackerman autographed poster. Ackerman won gold at the NCAA Wrestling Championships in 2001.

Sirianni is concerned with bringing attention to not only the athletics department but to the college as a whole.

“The one thing you don’t want to have happen is to put people, businesses and individuals in a position where they have to choose to give to the college or the athletic program,” he said.

Sirianni said that this project was as much a way to raise money for the athletics department as it was an opportunity to show Simpson and its students to businesses and people around the community.

“Not only was it a good fund-raiser, but the feedback that we’re getting is that it was an excellent opportunity to introduce Simpson College to a lot of different people and business,” said Sirianni.

Sirianni’s hope is that by doing these various types of fund-raisers will get Indianola and the Des Moines Community more actively involved in supporting Simpson College athletics.