Real students and the reality of TV 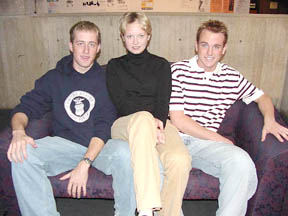 A lot of students feel the desire to experience their five minutes of fame. For some students, this desire becomes a pursuit.

Earlier this month, a few students went to audition for MTV’s “Real World” and senior Tiffany Colgan recently appeared on TLC’s reality show “While You Were Out,” where she redecorated her mother’s bedroom.

“I just went to the ‘Trading Spaces’ Web site and I found out that they were looking for applicants from the Kansas City area and so I just gave it a try. There were about 10 people who applied and they only chose three out of that,” Colgan said.

Once chosen to do a show of this nature, there is a lot of preparation involved before the actual filming takes place. Preparation involves everything from calling the City Council to talking to the Home Association.

“Before they even came to my house, they told me that I have to call the city to get permission for their trailer, the extra parking and also ask the city to pick up more trash on those days,” Colgan said.

Once the actual filming took place, it seemed like a never-ending, but enjoyable time for Colgan. There was a lot more involved in bringing the show to reality than what she had anticipated. “The crew came at about 8 a.m. and moved everything out of the living room so they could set up their stuff and prepare for the actual filming, which didn’t start until 2 p.m.,” said Colgan.

The real trick for Colgan was finding a way to get her mother out of the house before the crew came to work on her bedroom. With the help from the show, she convinced a family friend to take her mother to a nearby overnight spa while Colgan and the crew worked on redecorating the bedroom.

“When she came home, she was surprised but not as much as I anticipated. But, she still liked her new bedroom,” Colgan said.

While Colgan enjoyed her moments under the limelight, some Simpson students had their “almost famous” moments when they went to the “Real World” auditions in Ames. There were about 800 people there competing to be on this show. Among those who showed up for this were senior Jake Abel and sophomore Kyle Bloom.

Driving up to Ames for these auditions was much more convenient for Bloom, who previously drove to Minneapolis where he met former “Real World” cast members Dan and Flora (from Seattle).

“I was not entirely pleased at the way that the auditions in Ames were conducted. They had us fill out some sheets on personal information and then we were put in groups of about 11 and then we simply discussed sex,” Bloom said.

Abel also left the site filled with disappointment. “I don’t feel that they got to know who we are at all because they never even looked at those sheets we filled out,” said Abel. “I think that I would have stood a much better chance with a video tape audition.”

Being on the “Real World” requires people having their everyday lives taped for the world to view. It also requires the cast to take some time off school or work for the shooting of the season.

“If I had been chosen, I would definitely take some time off school to do the show and I do admit that I would hold back a little on the first week and then reveal my true self probably by week two,” said Abel.

“My parents would have been shocked by some of the things they would see on the show because they don’t know my wild side and that would probably come as a shock to them,” said Bloom.