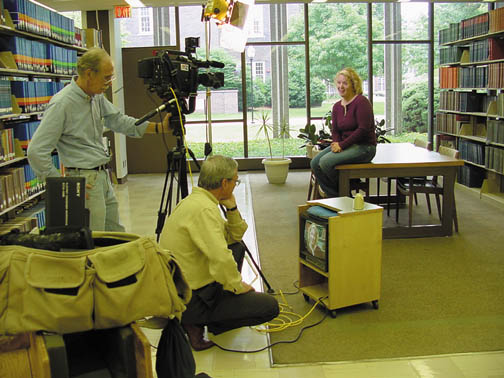 Simpson’s marketing department is creating an advertising campaign that reaches farther than past efforts, designed to reach a wider audience.

The marketing department was not created until this past year; prior to that there was no specific department that handled advertising and many different departments created their own ads.

“It is a new division put together to promote the college…we have our own agency up here,” said Michael Adams, director of public relations.

Adams said the department is focusing on “What is it we need to do to make Simpson better known.” The division has been given its own marketing budget, making the developments in advertising possible.

In answering this question, the marketing department decided they needed to put their ads where potential new students would see them the most.

In the past, the television ads were run mostly during the news, but this year they’ve decided to put the ads on primetime television during shows like “Friends” and on stations like the WB and Fox. This wasn’t a possibility in the past because a thirty second spot during “Friends” costs $2000.

The slogan they are using is “What College Should Be.” To support this, they will continue to use the format they’ve used in past years, featuring television ads with student testimonials explaining why they chose Simpson.

“There are a variety of factors used to select those chosen [to be in the ads],” said Kara May, associate director of admissions.

There is an initial interview with the possible participants, where students are asked a variety of questions.

“It is always a fun time, because it is interesting to hear the things the students have to say,” May said.

Admissions tries to choose a wide variety of students, looking at different aspects like where they are from, majors and trying to achieve a gender balance.

Freshman Kristine Wendt was one of the students chosen. “They tell us to be ourselves and be real,” Wendt said. “We create our own sincere and honest ads.”

The ads run about thirty seconds and consist of the student speaking into the camera. The ads will run in Iowa, but by introducing them into primetime television, the commercials will connect with potential students and their parents.