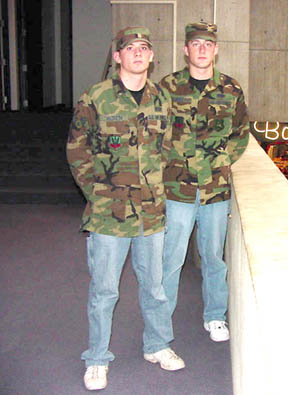 Two Simpson students, active in Air National Guard units in Iowa, give up at least one weekend a month and two weeks a year to serve their country.

Recently, freshman Ryan Hildreth and senior Jake Abel have given up more time due the war against terrorism.

While Hildreth is not on active duty at this time, he has been active in the past year.

Hildreth is a Radar Surveillance Technician in the 133rd Test Squadron at Fort Dodge, Iowa. His unit’s call sign is Coffin Corner. It has have two missions. One is to test new Air Force command and control equipment. For example, tests new radio and missile technology.

The second mission is close control and radar surveillance.

“We recently changed to a test squadron from an air control squadron, which means we have a mobile radar that we can take out into the field and provide air surveillance for a good-size area,” said Hildreth.

Hildreth returned from basic training on Sept. 18, 2001, one week after the Sept. 11 attacks. This was just in time to take part in Operation Noble Eagle, a part of the homeland defense implemented after Sept. 11.

His unit had radar running in Ft. Dodge to monitor air space in Iowa and the surrounding states.

He became active again in Jan. 2002. He had just started attending DMACC in Boone, Iowa, when he was told he was needed again.

When Hildreth went active, he received money back for his tuition and his books; however, he did lose his room and board fees.

Although not all students are affected in this way when they are called to active duty.

Abel is part of the Air National Guard 132nd Fighter Wing in Des Moines. He will take active duty the first week of November. He has known since May of this year that he would be going active. While he has been attending classes this semester, he will be gone for three and a half weeks, so he will have to make up what he misses.

According to Abel, the school is federally mandated to cooperate with him. He will be doing some of the work he will miss before he leaves, but the rest he will do when he gets back. He will take an incomplete for some of his classes so that he can finish them over winter break.

Both Hildreth and Abel decided to join the Air National Guard for similar reasons.

“I wanted to serve in the military, but I also wanted to go to school, and the Air Guard was the perfect compromise to do both,” said Abel.

When Abel leaves in November he will be going to Turkey in support of Operation Northern Watch, which is patrolling the “No Fly Zone” in Northern Iraq.

“I was on active duty for two weeks last year right after Sept. 11, but this is my first time overseas with the military,” said Abel.

If there is any trouble with Iraq during the time that Abel is in Turkey, he could get left over there.

“I’m leaving prepared to stay,” said Abel. “I’m making sure everything is in order here, like my parents having my checkbook, and all my stuff is finished. I have all my stuff set up in case I will be gone longer.”

School is not the only thing that is affected by the military for these students; so is family. Abel will miss spending Thanksgiving with his family, and is he is there long enough, he could miss Christmas.

Hildreth, on the other hand, has been gone quite a bit for his training, but he thinks it is a good experience for his family. His sister just went to Japan for the Air Force and he has two more siblings that may join the military.

“Basically it’s been a positive experience [for my family],” said Hildreth. “With the only downfall being the time away from home.”