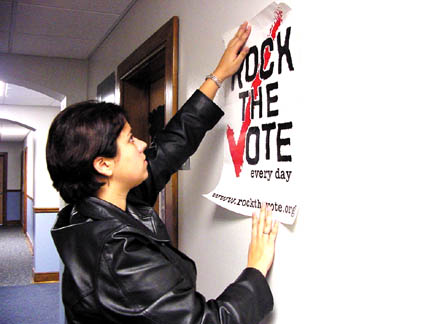 Juniors Andrea Diaz and Jessica McDonald couldn’t be more excited about Election Day and they hope to spread their enthusiasm to Simpson students – with or without the Nadas.

Due to a failure with the contract the concert will not take place.

“We couldn’t come up with the funds,” said McDonald. “It was going to cost more than what we were planning.”

“Since the Nadas were so popular last year we figured this would be a good way to reach a lot of students and get them registered to vote,” said McDonald.

“Part of my job is to get Simpson students to vote,” said McDonald. “Andrea and I thought this would be a great way to do it.”

Nadas fans are not the only individuals disappointed about the cancellation of Tuesday’s concert.

Simpson will be sponsoring satellite voting in Brenton Student Center on Oct. 17.

No matter which county students are registered to vote in, students can vote in BSC on Oct. 17.

“Satellite voting is a convenience for students because they don’t have to go back to the county where they’re registered to vote,” said Diaz.

The first step in bringing satellite voting to Simpson was to get 100 signatures. Once they collected 100, they had to get the approval from the Warren County auditor.

The satellite voting had been a working idea since the organizational fair on Sept.12 when they started getting signatures.

The College Democrats, College Republicans and Progressive Action Coalition were all in favor of bringing satellite voting to campus.