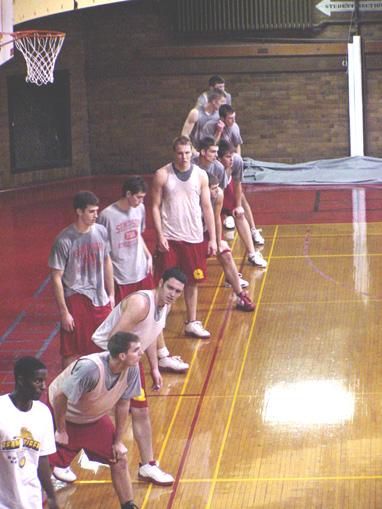 With a bulk of its team returning from last year, the Simpson men’s basketball team will be looking to move up in the conference race this year.

The Storm will travel to Milwaukee this weekend to open up its 2002-03 campaign. The Storm ended strong in the conference race, finishing third last year.

Head Coach Bruce Wilson likes what he has seen during practices thus far. “The guys have been receptive to us coaching them,” Wilson said. “Our attitude and work ethic has been positive so far.”

Leading the way for the Storm this season will be a first-team Verizon/CoSIDA Academic All-American player, Jesse Harris.

Harris was named first-team All-Conference last year and also was a finalist for the Jostens Award which honors the top basketball player in Division III play. Harris averaged over 16 points per game last year along with 5.7 rebounds per contest.

“We have had a lot of guys improve on their individual game over the summer, but also we are playing more like a team than we have in the past,” Harris said. “Our depth this season is going to be the key for us.”

Richter led the team in three-point shooting while veteran point guard Walker was selected second team All-Conference after leading the storm with 93 assists and 57 steals.

“We have been putting a lot of emphasis on working hard, running the floor on offense and defense, and our next step is to improve on our mental errors, such as not being in position and blocking out,” Wilson said. “We want to get rid of those mental errors so it will not get in the way of being as good as we are capable of being.”

The men’s team has a different look than it has in the past with a number of players over 6-feet 6-inches tall.

“Our size will be huge for us this year,” Wilson said. “We have some beef in the big guys and they are hard to move out of the lane. But they are also really doing a nice job of running the floor for us,” Wilson said.

Returning is 6-foot 6-inch senior Matt McCulla and 6-foot 7-inch Landon Drake. With the addition of 6-foot 8-inch junior transfer Barry Moore in the lineup along with freshman Frank Hatlestad, the Storm will be deep at the forward and center positions.

“We have a lot of depth on our team,” Wilson said. “For us to get where we want to be, we need a contribution from ten players each night.”

According to Wilson, the conference does not have one clear-cut favorite this year.

“In the men’s race you can never take anyone lightly. As soon as you lose focus you can get beat by anyone,” Wilson said. “We are going to have to be ready to play every night out.”