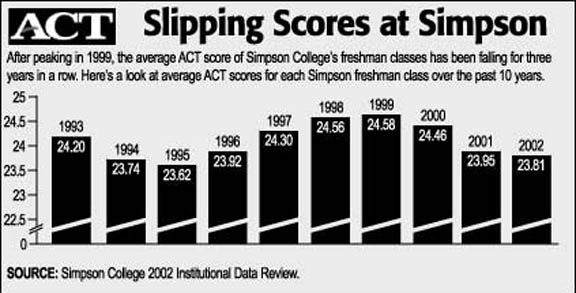 For the second straight year, the average ACT for the incoming freshman class has dropped.

“The ACT’s are just one important factor among many used to determine who will be admitted,” said Deb Tierney, vice president for enrollment. The faculty admissions committee reviews ACT scores, class rank, GPA and overall strength of the curriculum when looking at applications for admission.

“We want students who have taken a solid college prep curriculum all four years of high school,” said Tierney.

According to the official ACT informational Web site, the national average composite score for 2002 ACT-tested graduates is 20.8. The majority of freshmen enrolled this year at Simpson fall under the ACT score range of 20-25, with an overall average of 23.81, a slight drop from past years. However, compared to last year, there are also a smaller percentage of students from the lower ACT range and a higher percentage of students who graduated from the top quarter of their graduating class.

Many of the comparison schools do not have an exact ACT score requirement. The exception is Coe with a requirement of 20.

Simpson students agree that there are other important areas colleges consider when admitting students.

“The ACTs don’t show your work ethic and they don’t necessarily show what you know or how smart you are,” said freshman Lisa Rasmussen. “Some people don’t test well; they need to focus on GPAs and classes taken in high school.”

“I took both the SATs and the ACTs,” said freshman Matt Bower. “I thought the ACT was easier than the SAT. If lower averages mean they are a looking for a more well-rounded person, I think it’s a good thing.”

“This [average] reflects the enrolled students, it does not reflect the admitted applicant pool,” said Tierney.

This means that the students who chose not to go to Simpson are not represented in the 23.81 average.

“We take a lot of pride in the students who are enrolled here at Simpson, knowing that they are admitted because they have the tools to succeed,” said Tierney. “We will only accept those students that we feel have the potential to succeed here.”