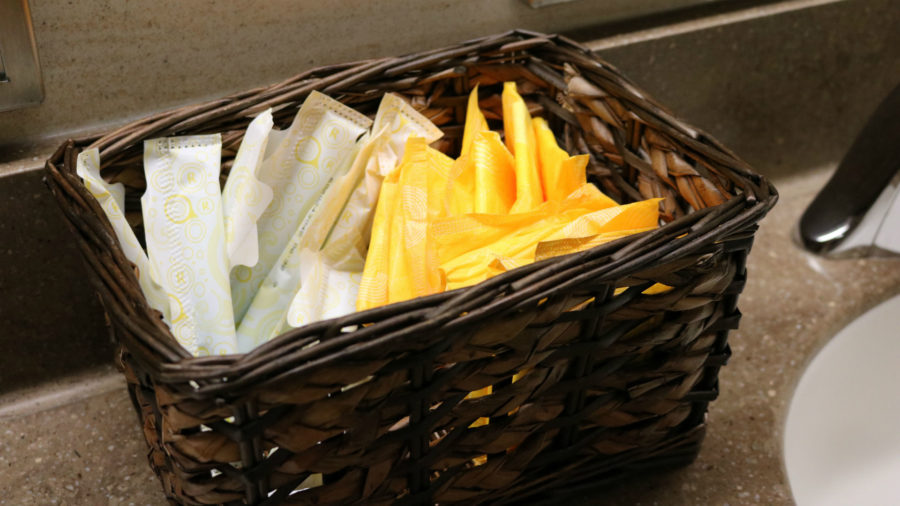 Feminine hygiene products will be more readily available around campus for students.

by Olivia Baxter, Special to The Simpsonian

Senior Tori Halloran suggested the idea of tampons and panty-liners for the facility in December 2015 to Molly Monk, a senior senator on the Student Advocacy Committee of SGA.

Monk’s committee presented the idea March 2, and the group unanimously passed the motion.

Tampons and panty-liners started being provided in all women’s and non-gender bathrooms in Kent April 4.

SGA freshman Sen. Jacob Bruns put together a model comparing prices and ratings between feminine product brands. His data show the project will cost around $586 through May Term.

SGA hopes to continue the project through next year.

“We are using student activity funds to provide a valuable service for (the) campus,” Monk said.

Five bathrooms in the campus center will contain the emergency feminine products.

SGA has contacted the Simpson Feminist Club about upkeep in the future and will continue buying the products.

The incoming president of Simpson Feminists, Liz Nimmo, isn’t the only supporter of the new plan.

Simpson sophomore Nick Laning said, “I think it’s a great opportunity for SGA to make a difference on campus.”

With a 60 percent female population on Simpson’s campus, according to Bruns, many students feel positive about the progress.

Senior Virginia Atwell said, “Especially since feminine products are taxed extra in Iowa, it is important for college students to have access to free hygiene products to avoid sticky situations.”

Atwell said sometimes a period can come as a surprise and leaves a woman unprepared.

“You can’t control when you get your period, and sometimes you forget to bring something,” Monk added.

While the issue directly affects 60 percent of Simpson’s population, Monk had words of advice for the men.

“Men should learn about how periods work,” Monk said. “Men should care about this because they would care if women were bleeding everywhere.”

According to fusion.net, all but eight states implement taxes on feminine products.

Many states do not consider tampons a necessity and do not allow exemptions.

Only five states have decided to not tax tampons because they are a necessity and the remaining three don’t have sales tax.

“Some states don’t tax items such as pregnancy tests, disposable heading pads or incontinence pads for bladder dysfunction, but still tax tampons,” Taryn Hill, a writer at Fusion.net. “Other states, such as Alabama, even have ‘tax holidays’ in the summer when everyday items normally subject to sales tax are duty free for a day or weekend, yet feminine hygiene products are still taxed.”

A 36-count pack of Tampax Pearl Ultra Absorbency Unscented Tampons costs $6.97 before tax at Wal-Mart. If women use two to three tampons a day and usually menstruate for five days that would be an extra $7 every other month to buy tampons.

“Feminine products are taxed in Iowa, which is not OK because they are necessary,” Laning said.

The new program makes them available to women in emergency situations in Kent.”

Jennifer Weiss-Wolf and Cosmopolitan magazine started a petition in November 2015 urging U.S. legislators to change the sales tax laws in the 40 states that impose tax on feminine hygiene products.

The petition, currently at 58,415 signatures as of April 2016, said, “As anyone who menstruates knows, dealing with a period is a monthly necessity — and a costly one at that. Women already spend upward of $70 a year on sanitary products like tampons, pads and menstrual cups.”

Across the world, tampon tax is becoming a widely known issue.

Canada recently became the first nation to abolish the tax completely, and women in other nations are urged to as well.

Simpson is joining the movement, allowing students access to these products free of charge.

SGA is not funding the feminine hygiene needs of all the women on campus all year round but providing the just-in-case emergency tampons and panty-liners, figuring at least one per day, per student.

As the Axe the Tampon Tax! petition started by Weiss-Wolf and Cosmopolitan magazine said, “Change in the United States is imperative – yet here, it must happen state by state, where sales tax is levied and collected. Therefore, we are simultaneously petitioning each and every one of the 40 states that continue to profit from our menstrual periods: Treat women and girls equally and eliminate this unfair and discriminatory tax.”