Going to school with mommy and daddy 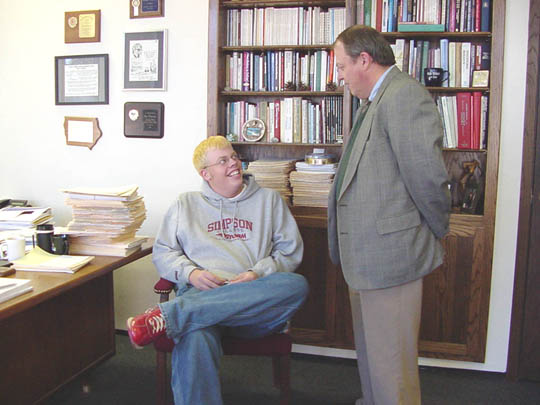 Imagine walking across campus, frantically trying to make it to the next class, when someone shouts out, “Hey!” It’s Mom.

Sounds odd to most of us, whose parents are a car or plane ride away. But for a few, going to college where their parents are also employed is an experience in its own.

Freshman J.J. Thorius wasn’t set on coming to Simpson at first. But after visiting other campuses, “Simpson just seemed comfortable, kind of like a home away from home,” he said. It was exactly what he was looking for.

Senior Carrie LaGree, on the other hand, transferred to Simpson more for financial reasons. “The Staff Dependency Grant pays for my tuition, which is nice because I was tired of going into more debt.”

Both Thorius and LaGree agree that one advantage to attending Simpson is that they are close to their family. “It’s nice to be able to see my family whenever I want to. I can come spend the night at home whenever I feel like it, like if I just want a night away from my dorm,” said LaGree.

It is also nice to know what to expect from Simpson before attending.

“It’s easier to have my questions answered,” Thorius said. “I know a lot more people coming here, so it was easier to be more sociable and join more clubs because I already knew people in the organizations.”

The locality of Simpson made it an easy adjustment to college life for Thorius.

“I also don’t get lost. I actually knew my way around here, unlike some first-year students on those first few days of classes,” Thorius said.

On the other hand, being real familiar with campus can have its own setbacks.

“If I ever do anything wrong, everyone is going to let me know about it!” said Thorius.

LaGree said that there are a few things she still hasn’t gotten used to about the change to Simpson.

But, Thorius has a different spin on this situation.

“Just because I grew up here, it’s really like a world of its own. There’s always something to do, so I am rarely away from campus life. If I wanted to hang out with high school kids I knew, I’d have to make the effort to go off campus,” Thorius said. It’s easy to just become engrossed with college life, so the fact that you grew up here really isn’t a big deal.”