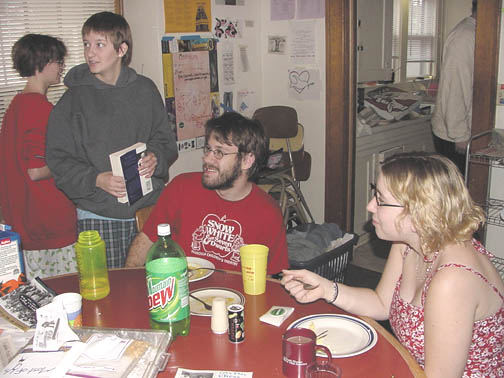 This is the story of some strangers, living together. Their lives are not taped and there’s no hot tub. Wonder why co-ed living arrangements are nothing like “The Real World?” The popular television show gives a bad name to co-ed living arrangements with the harsh stereotypes and rampant promiscuity. In all essence, coed living here at Simpson is much like living at home with members of the opposite sex.

Men and women living together in the same house has been going on for a while, according to Laurie Deinberg-Hoppe.The Performing Arts house has lived coed for about eight years, and the Progressive Action Coalition house just started last year with coed living. One of the RLC houses is also considered coed.

But, all three of these houses have different definitions of coed living.

At the Progressive Action Coalition house, men and women share rooms with the same sex, but share the house with each other.

“I have brothers, so it’s really no big deal, there’s not much of a difference,” said sophomore Kayla Schmidt.

The vibe at the PAC house is much like a family. They share inside jokes and enjoy hanging out in the kitchen and living room with each other.

“The fact that I’m in a coed living arrangement is the furthest thing from my mind,” said senior Brian Depew.

The living arrangements at the RLC house are much different. There are two floors to the house, and the men live on one floor, and the women on the other. But, there are still little things that come up.

“The guys come down to my house to do their laundry, so sometimes there’s underwear or something in the washing machine or dryer that hasn’t been picked up yet. And it’s weird to sometimes wonder when I’m done in the shower if it’s okay to leave the bathroom in just a towel, because there might be guys wandering around in the house,” said junior Sara Neppl.

“It’s really not much different from living in the dorm. You have to deal with loud people in the room above you, sharing the laundry machine, etc.,”said senior Allison Smith. “It’s really just gender that is the difference, and most people are able to see beyond that and be completely comfortable with the arrangement.”

The college has no specific policy or code of conduct for the people in the coed living arrangements. In a sense, living in the coed houses is much like living in the dorms. Problems with roommates or housemates have to be worked out. It’s just that in some cases, that roommate may not be of the same sex.

So the decision to live in these co-ed living arrangements should require some maturity. There’s no “Real World” in these houses, if anything, it’s more “Family Ties.”