Taking off on their own Vegas vacation 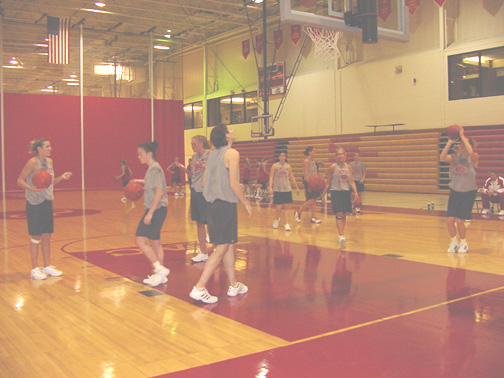 The tournament has 12 teams participating and those teams are broken down into three smaller tournaments based on rankings of the teams done by the participating coaches. Simpson will be playing in the second tier. All the games will be taking place at the University of Nevada Las Vegas’ practice facility.

The first opponent for the Storm will be Aurora College of Illinois. Simpson will then play either DeSalles, who played in the NCAA tournament last year, or Carthage depending on the outcomes of both games.

Senior Christy Pierick has never been to Las Vegas and is excited to make the trip. She sees the trip as a reward for the seniors as well as a chance to gain experience.

“As a team it’s kind of nice with us having so many seniors,” said Pierick. “It’s a time where we can go and play and get experience against other teams.” Pierick would like a late Christmas gift of a couple of victories. “I’m sure the top goal would be coming back with two wins.”

Niemuth decided that making the trip out to Las Vegas to play some good competition was better for the team than staying home and playing teams that would be considerably less challenging.

“It’s better for us than playing a couple of teams that we knew we could beat. We have to make sure that we are challenged and getting better,” said Niemuth.

According to Niemuth trips like these not only help the level of competition in games but in practice as well. He also uses trips like these as a recruiting tool to get student athletes to come and join his program.

“We told them last year, as our recruiting class came in, that they’d have the opportunity to earn a trip to Las Vegas,” said Niemuth. “What we’ll tell next year’s recruits is that we’ve been to Las Vegas and we plan on going back in a couple years.”

The trip won’t be all business for members of the team, as Niemuth plans on letting the ladies unwind a little and enjoy the warmer climate. “We have some sight-seeing to do, I mean just walking up and down the strip is amazing.”

Senior Katie Egli was on the team two years ago when the Storm made the same trip and came home with two victories and the number two ranking in the nation. Is something like that capable of happening again? “Yeah, I think so. We have a lot of depth and so many capable players that something like that is definitely possible,” Said Egli.