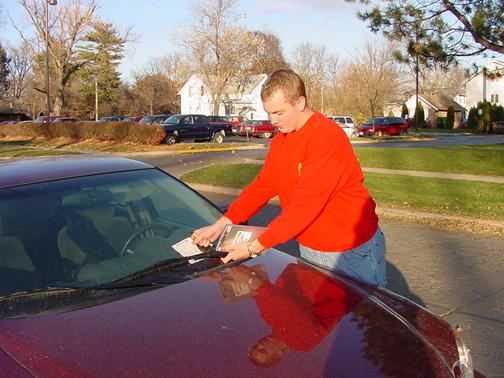 Student senate has been taking a more active role regarding several issues on campus, including faculty parking tickets and Simpson College’s alcohol policy.

“I really think that students do have complaints about the way things are handled on campus and I think that senate is a way of helping them by working with the administration to try to make changes,” said Ryan Hildreth, freshmen class president.

Hildreth is chair of the campus policies committee in student senate, which recently looked over Simpson’s parking regulations. Hildreth found out that student parking tickets and fines go toward the operating budget of security and that students’ $40 parking registration fees go into a general fund for (ask Stepahie Krauth).

“The biggest thing I found out was that faculty does not have to pay their parking tickets,” said Hildreth.

Hildreth said the policy became more noticeable after he dealt with the issue first-hand.

“I walked out of my dorm to go to class and saw a faculty member parking in the Barker lot, which is a student lot. I approached the professor and politely asked him to move. He said that I obviously did not know who I was talking to, that he had been here for 23 years and would park wherever he wanted to,” said Hildreth.

“I am not currently aware of any mechanism in place, or any policy in the past, that requires faculty and staff to pay their parking tickets,” said director of security Chris Frerichs.

Some faculty members do pay their parking tickets, but they do so voluntarily.

“I know there are a lot of faculty members who pay their parking tickets,” said Stephanie Krauth, associate dean of students, “They pay them because that’s what kind of people there are.”

While Simpson College does not currently have any guidelines requiring faculty members to pay their parking fines, it will be looked into according to Jim Thorius, dean of students.

“Older students on my committee said that the enforcement of rules involving alcohol has been a little more strict this year,” said Hildreth.

The alcohol policy on campus has not changed in the past year, although it was clarified in the 2000/2001 school-year. According to Hildreth, the policy maybe is being observed more strictly, but it has not been modified. He also stated that rumors regarding a dry campus in the future were false.

The senate has also been dealing with their budget. Student senate has $6, 675 left in their budget that will be carried over into next semester. The money is what is left over after all of the line item budgets are paid.

Pearl Podgorniak, student body vice president, said, “When Jake and I came into student senate, all it did was allot money to organizations. We knew it could do so much more than that, so we decided to change the constitution. Now we have committees that can deal with any concern that a student has. Student senate is actually dealing with things that affect the student body. I’m personally very happy with the way senate has progressed this semester.”

Senators are looking forward to next semester and continuing to work on issues that regard the student body.

“I really think we’re on the right track, we may have a long way to go, but we’re going in the right direction,” said Hildreth.