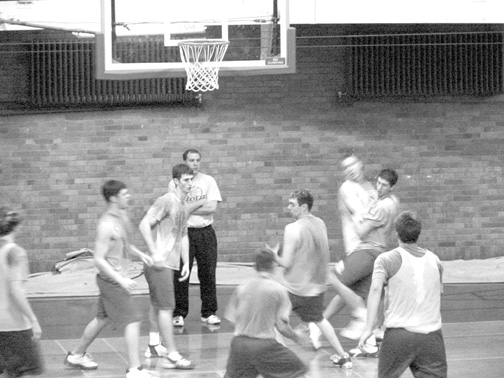 by David Morain and Seth Nailor

Frontcourt: Simpson’s frontcourt is the most experienced in the conference. Senior standout Jesse Harris is a three-time all-conference selection. Junior forward Matt Brown has grown into a team leader and is poised for a break-out year. Junior Barry Moore, a transfer from Southwest Iowa Community College, gets the start at center this year for the Storm. Senior Matt McCulla along with sophomores Landon Drake and T.J. Irvin provide a deep bench that could help win a conference championship.

Backcourt: Lightning-quick junior Dirk Walker, an all-conference selection last year, will lead the Storm at the point again this year. With a temporary injury to junior Nick Boyd, Simpson will look for help from junior Josh Richter, a pure shooter with good range, and sophomore Brad Allen. Junior Mike Tiedeman and sophomore Mike Martin will back up the guard spots. After Christmas, the Storm will receive the services of senior Langdon Bridges, an athletic guard who has been on a religious mission in Brazil for the past two years.

Backcourt: Junior point guard Casey Pelzer will be the floor general for the Beavers this year. Joining him be sophomore three-point specialist Eric Wiebers as soon as he returns from the football team. Sophomore Reece Viet, a big guard with deadly range, and junior Landon Stribe will come in off the bench.

Frontcourt: The Dutch will showcase fresh faces in the frontcourt this season as only two forwards are returning letter winners. Senior Joe Steinkamp has the most experience, playing in all of the team’s 26 games last season while averaging 5.2 ppg and 4.5 rpg. Sophomores Brandon Vos, who played exclusively with the junior varsity last season, and Josh Huisman, a big man with good touch around the rim, will join him. Sophomore center Mark Isaacson, who joins Steinkamp as a returning letter winner, will start the season coming off the bench.

Backcourt: Whether or not Central has a winning season falls squarely on the shoulders of senior Tony Polito, who led the Dutch in scoring last season with 11.3 ppg. Junior Scott Veldhuizen, who has shown potential as a legitimate scoring threat early this season, takes the other guard position. Freshmen Jonathan George and Jason Crews will see plenty of action in this shallow backcourt.

Frontcourt: Six-foot six-inch sophomore Brandon Sain has already proved he can fill the bucket, pouring in 26 points against Iowa State in their 87-65 loss to the Cyclones. This season Sain will look for help from senior brother Bruce, a second-team all-conference selection last season after averaging 18.5 ppg and 8.5 rpg. Six-foot five-inch senior Andrew Tower will fill in at the center. Trent Gaines is a solid back-up at any of the three positions.

Backcourt: The Koehawks are loaded with young, capable guards for this year’s run at a conference title. Juniors Luke Niemann and Jake Fish have the most experience, but sophomore Nick Wilkins and freshman Nate Clapham, who scored 17.7 ppg as a high school senior, may end up with the most minutes. Senior point guard Luke Gentzler is an effective leader in a starting role or off the bench.

Frontcourt: Senior Luke Fedderson is a two-time all-conference selection at center. Joining him up front are senior Bryan Goldsmith and junior Matt Ditch. Ditch, who also plays football for the Rams will be replaced by freshman Dan McClanahan until he is ready to join the team.

Frontcourt: Senior Robert Jenkins will shoulder most of the load up front for the Spartans. He is joined at the forward spot by junior Clay Herrold . Dubuque has two freshmen at center with two very different styles; Greg Mitchel has a finesse game while Andrew Fisch is all power. Both will see considerable time on the court.

Backcourt: Senior Dustin Bierman was the Spartans’ top scoring threat last season. Point guard Will Benson led the team in assists last year as a freshman with 72. Coming off the bench will be seniors Michael Wehrle and Terry Dunn, as well as freshman Walter Woghiren.

Frontcourt: There’s no substitution for experience, and the Duhawks are full of it. They are led by senior forward Travis Williams, a first-team all-conference selection last season. The frontcourt will also feature junior forward Matt Uthoff, a long-range bomber who made 55 three-pointers last year, and senior center Joel Cornilsen. The Spartans will also get some frontcourt help from a couple of transfers: six-foot seven-inch Dwayne Penn from Iowa Central Community College and Mats Nordin, a seven-foot two-inch Swede from Western Michigan. Pete Silvestri, a six-foot nine-inch freshman, will also see some playing time.

Backcourt: Senior Brian Feldott returns to run the point for the Duhawks. Sophomore Jeff Ludovissy, who gets the start at the shooting guard, is dangerous from downtown. Last season, three out of every four made field goals by sophomore Keegan Clemens were from behind the arc. Six-foot one-inch sophomore Tom Sieverding, brother of former UNI standout Robby, will come off the bench this season at the point.

Frontcourt: The Norse are going to make it tough for teams to match-up with their frontcourt height this year. They are led by six-foot eight-inch senior center Adam Morrissey, the team’s leading scorer a year ago. He is accompanied by a pair of six-foot six-inch forwards, Jake Lappe and Matt Richardson. Senior Tim Nehring and junior Justin Pieper, a starter a year ago, provide some depth.

Backcourt: Luther has a young new backcourt this season in sophomore Brandon Grimm and freshman point guard Andy Rump, the only Norse recruit to make the varsity team. Backing them up will be sophomores Eric Lowe and Jason Karaidos, as well as six-foot four-inch junior Chris Morrissey, brother of starting center Adam.

Frontcourt: Senior forward Doedrick Sanders, a second-team all-conference selection last season, will lead a Peacock team that returns all its starters from last year. Sharron Spain will take the other forward spot, as Upper Iowa tends to start three guards. Senior Rich Trevino will play a big part in the offense off the bench. Transfer junior Nabeel Bhatti will also get some minutes.

Backcourt: Rashad Richardson is missing in action so far; he is listed on the roster but has not played in any of the early games. Without him, the Peacocks will miss out on a big scoring punch. They will have to look for leadership in senior swingman Max Montenegro, a sharpshooter who made 36 three-pointers last year. Senior point guard Mario Jones led the team in assists last year with 76, though it should be noted that he also led in turnovers with 89. Freshman Michael Jackson and transfer junior Craig Brown will battle for the remaining guard spot.

Frontcourt: The Knights’ game revolves around senior forward Mike Pipho, a first-team all-conference selection last year who led his team in points, rebounds, blocks and steals. Joining him up front is fellow senior forward Jake Olsen, a second-team all-conference selection with great range. Junior center Kip Pederson will lend his six-foot seven-inch frame to the lineup when Wartburg decides to start a trio in the frontcourt. When they don’t, Pederson, senior forward Kyle Recker, and sophomore center Alan Johnson will fill backup roles.

Backcourt: Wartburg returns all three of its starting guards from last year. Super-sophomore Adam Sanchez led the Knights with 67 assists last year. He will combine with senior Dan Schuknecht and junior Matt Armentrout to form arguably the best backcourt in the conference. Combo-guard Rance Cartmill, a multi-talented six-foot two-inch freshman, could weasel into the starting lineup by the end of the season.

The IIAC has something it hasn’t had in quite sometime – a wide-open conference race. There are five teams that can make a legitimate run at the conference championship this year.

Returning champions Buena Vista can claim to be the early season favorite based on its accomplishments of the last two years. Simpson returns all five starters and a ton of experience. The Storm will return to the days of old and use superior depth at all positions to try and run teams off the court. Wartburg brings back its “Mr. Do-It-All” senior Mike Pipho who knows how to win a conference championship.

Loras is the embodiment of the conference this year: BIG. Several teams have upgraded their size and Loras, not to be outdone, will have 7 foot-2 inch transfer Mats Nordin roaming the paint to try and help the Duhawks to capture a conference title. Coe will also have a shot at the title.

The bottom half of the conference should shape up with Cornell being the best of the rest. Upper Iowa returns its starting five and will use an athletic bunch to beat some teams that it shouldn’t. Dubuque, Luther, and Central will round out the conference race. With big time match-ups early, the first couple of weeks could decide who makes the conference tournament to keep their hopes alive of playing in the NCAA tournament and who goes home to think about next year.