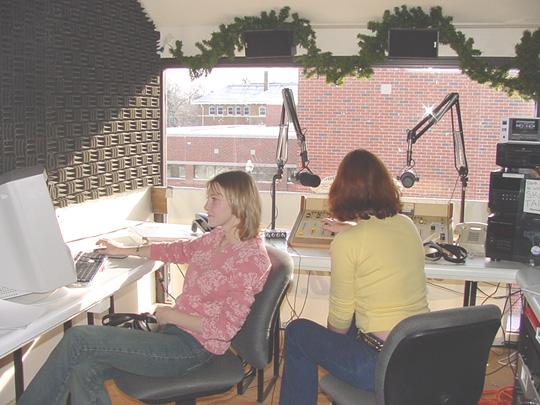 KSTM and other campus groups have put their minds and money together to bring students entertainment that they’ve been awaiting.

Picture a warm April night with the campus migrating to the courtyard to take in the sounds of one of the nation’s rising bands. If this sounds good, mark the date April 11 on your calendars, because Troubled Hubble is coming to Simpson.

Freshmen Ryan Lieser had a major role in getting this band to consider playing at Simpson.

“Troubled Hubble is played a lot at colleges all across the country,” Lieser said. “I’ve seen them perform four times. Sara Neppl went with me the last time, and we agreed that it would be awesome if they could come here.”

Lieser said that he had a good feeling about asking this Chicago-based band to perform at Simpson.

“They play a lot of smaller shows, and they also seem really eager to connect with their fans,” Lieser said. “They’re just fun to watch because they like to jump around, have a good time and rock out.”

When Lieser spoke with the band members his impression of them was that “they are the coolest guys who you will ever meet.”

Lieser has already received support from Barker Hall Council, KSTM, RHA and CAB, and has also asked Senate to contribute to the event, and plans to approach the fraternities and other various organizations as well.

“We’re really trying to bring the whole campus together and get them involved,” Lieser said. “We want a huge turnout, and we’re expecting to have that by having so many people interact with its planning.”

“The concert we’re planning is part of our desire to do more for the students. I thought this would be a great way to bring a cool band to campus and to get KSTM’s name out as well,” Neppl said.

College radio stations like KSTM are largely responsible for Troubled Hubble’s success thus far. The University of Nebraska station reported the band’s song, Mrs. Whiskerson, as a top-requested song for 2002. Also, the College Music Journal recently ranked the band’s new CD, Penturvia, as No. 42 in the nation, according to Lieser.

Lieser says that you can catch a preview of Troubled Hubble by tuning in to KSTM during one of his weekly time slots.

“They (Troubled Hubble) sing about funny stuff. Their music isn’t too hard or mellow. It’s a happy medium,” Lieser said.

Neppl said that KSTM is also looking into bringing another band to campus yet this semester. Stay tuned for more information.