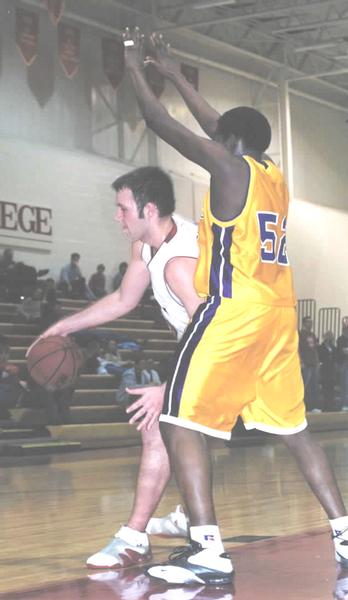 Simpson College men’s basketball took its struggles into the last home stand and regular season games of the season last weekend and saw the season come to an end in IIAC tournament play on Tuesday.

Junior forward Matt Brown had a last second three-point attempt rim in and out. Brown led all scorers with 22 points. Fellow junior Barry Moore chipped in 14 points and 5 rebounds.

The Storm shot 17 percent from behind the three-point line, making three of its 17 attempts.

The cold shooting against Loras quickly changed the following night when Simpson junior Josh Richter shot the Dubuque Spartans out of the gym.

Richter went 10 for 10 from beyond the arc as he totaled 32 points in 20 only minutes of action. The game saw Simpson break out of its slump in a major way.

“It was a good way to get the confidence in the team going again. It was good to see our shots actually fall on a consistent basis, so when it comes to tournament play hopefully it will carry over for us,” said Richter.

With its second half of the season struggles, Simpson finished fifth in the conference and geared up for the conference tournament. The Storm traveled to Dubuque on Tuesday to take on the Loras DuHawks coming off the most impressive showing of the season.

The men dropped a 57-75 loss to the DuHawks in the IIAC tournament quarterfinals to bring the season to a close.

The women’s basketball team needed to win only one of its final two conference games last weekend to clinch the regular season IIAC championship.

Instead, the Strom dropped two consecutive games for the first time this season.

Senior captain Sara Sonderman admits the team is down from the losses but finds solace in the position that they it is in. “Obviously we are down and didn’t get the conference title by ourselves, but like coach said there are seven other teams in the conference that would give anything to trade places with us. We just really didn’t want to share it,” said Sonderman.

Loras swept the Storm this season and took the conference championship home to Dubuque. Last Friday night it was Cortney Kettmann creating the action as she tallied 21 points and 14 rebounds in helping to hand the Storm a 66-62 loss.

Senior Tiff Whitsell led Simpson as she poured in 14 points in the losing effort. The Storm shot only 40 percent for the game and made 10 of 20 free-throw attempts on the night.

The following night it was Dana Kester and the Dubuque Spartans that spoiled things.

Kester had 32 points and made all 14 of her free-throw attempts. The Spartans had five players in double figures while sending Simpson to the second spot in the conference.

Senior Amanda Pilcher had 18 points and 6 rebounds in the losing cause. The Storm had a chance to avenge its 94-84 loss on Tuesday when the Storm hosted the Spartans in the first round of the conference tournament.

“Every team is going to come in and give there all because every team wants to beat us. We have to accept the challenge and make sure we come ready to play,” said Sonderman.

The team rebounded Tuesday night to defeat the University of Dubuque 84-71 to advance to the tournament semifinals against Wartburg tomorrow night in Cowles at 7 p.m.

But with the Simpson wrestling team, things aren’t always what they seem. The Storm went to Loras College to compete in an IIAC wrestling tournament last Thursday.

The Storm returned with a seventh place finish that is better than it would look at first glance.

Head coach Ron Peterson tried to put his teams’ effort in perspective after competing in such a tough environment. “I’m not disappointed in our individual efforts I’m really disappointed for those guys who really worked hard for us this year and didn’t make it,” said Peterson.

Peterson feels all three have an excellent chance at doing well in Ada, Ohio. Manny has already defeated the defending national champion once.

George is making his third trip so experience is on his side awhile Christensen has proven he can compete with anyone when he beat the third ranked wrestler at his weight earlier this year.