Play celebrates anti-war around the world 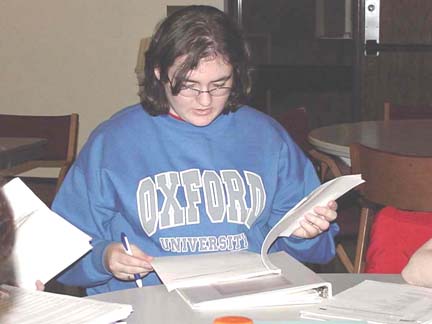 Sophomore Lindsey Ingles has brought this movement to Simpson College.

“A friend of mine in Minneapolis e-mailed me and told me about the play,” said Ingles. “We decided this is something we should do. So I’m doing it here and he is doing it there.”

“Lysistrata” is an ancient Greek comedy that is about the Spartan and Athenian women during the Peloponnesian War.

“The women did not agree with the war,” said Ingles. “The men only came home to have sex with their wives. So the women stopped having sex with their husbands.”

Lysistrata has been viewed as a feminist play in the past, but this time it is used as a protest of war.

“The point of the play is that the women are holding a peaceful protest to end a war they do not agree with,” said Ingles. “Performing this play is something I want to do to protest our country going to war.”

So far Ingles has recruited 13 people to be in the cast.

“There are students, staff and faculty,” said Ingles.

Ingles believes that the play is going to be interesting, not only to watch, but to perform as well.

“It’s hard for us to keep straight faces,” said Ingles. “The language of the play is very blunt.”

The play will be read around the world on March 3.

“There are 782 readings in 43 countries,” said Ingles. “The number is rising daily.”

There are several translations of the play being performed. Ingles is using a translation that protests more against previous world wars.

“All the plays being performed are a protest against our going to war because it is what is going on right now,” said Ingles. “I picked a version that is more specific to previous world wars because history repeats itself.”

Ingles views this as a world movement that will hopefully bring to government officials attention that not many people want to go to war.

“March 3, 03-03-03, will be a World Wide Day of Peace,” said Ingles. “Eighty percent of the people in England do not want this war; people in Cambodia are protesting this war.”

The play is to be performed at 6 p.m. in Leckberg Hall on March 3 and will be about an hour long.

“This is something that has never have been done before,” said Ingles. “Hopefully it will never be done again.”