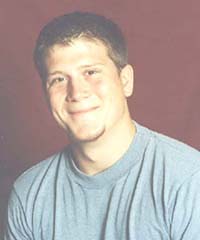 T.J. Ford, 5-10 guard, So., Texas – Ford is the catalyst behind the resurgent Texas basketball program over the past two years. He brings a tough yet smooth style to the court, allowing him to get plenty of shots (15.0 ppg) while dishing out assists to his teammates (7.1). So far, nobody has been able to contain him this season. Ford is considered by many to be the best player in the nation.

Kirk Hinrich, 6-3 guard, Sr., Kansas – A native of Sioux City, IA, Hinrich left his home state to pursue a championship ring with Coach Roy Williams and the Kansas Jayhawks. So far, he hasn’t won any titles, but he has become one of the players in the country. This year he has averaged 17.9 ppg, 3.8 rpg and 3.8 apg, as well as shooting 44 percent from behind the arc. He is one of the main reasons that Kansas has hopes of reaching the Final Four this year.

Carmelo Anthony, 6-8 forward, Fr., Syracuse – Rarely do you see a freshman on the first team, but rarely do you see a freshman like Anthony. The kid has put up huge numbers (21.8 ppg, 9.6 rpg) on his way to leading Syracuse to certain NCAA tournament berth. He also has an incredible 14 double-doubles so far this season. Get a good look at him now, because Anthony probably be in the NBA come next season.

Nick Collison, 6-9 forward, Sr., Kansas – Another product from Iowa (Iowa Falls), Collison has been nearly unstoppable at Kansas over the past four years. His numbers speak volumes (18.7 ppg, 9.1 rpg, 1.2 spg, 1.6 bpg) but it’s his tough, physical style that he brings to the game that makes him a true star in college basketball. One of the reasons his scoring is so high is his incredible 55 percent shooting accuracy.

David West, 6-9 center/forward, Sr., Xavier – Perhaps no one has been as dominant as West this year. He has scorched the Atlantic 10 conference, scoring 20.3 ppg while hauling down 12.1 rpg. His best game this year came against Dayton on Feb. 8, where he poured in 47 points and grabbed 18 rebounds. Xavier can only go as far as West can carry it in the tournament.

Chris Thomas, 6-1 guard, So., Notre Dame – The Fighting Irish are showing that it’s not all football at South Bend, IN, and Thomas is the main reason why. Though he can certainly fill the hoop (18.0 ppg) it’s his ability to get his teammates open shots (7.2 apg) that separates him from the pack. He is a tenacious defender (1.8 spg) and takes great care of the ball (2:1 assist to turnover ratio).

Hollis Price, 6-1 guard, Sr., Oklahoma – Was considered unstoppable until T.J. Ford came into the Big XII. Still, Price has earned his dues, averaging 19.3 ppg, 3.0 apg and 1.5 spg. He is probably the toughest player in America, as he routinely gets bounced around like a ping-pong ball when he drives to the lane. No one is more clutch at the charity stripe than Price, who makes 94.5 percent of his free throw attempts.

Emeka Okafor, 6-9 forward, So., Connecticut – Okafor may not score as much as the other All-Americans (15.4 ppg), but he more than makes up for it around the basket. He is first in the nation in blocked shots (4.7 bpg) and ninth in rebounding (11.0 rpg). If that wasn’t enough, he makes an incredible 58 percent of his field goal attempts and has 16 double-doubles on the season.

Mike Sweetney, 6-8 forward/center, Jr., Georgetown – The man is a monster in the paint, scoring 22.5 ppg while ripping down 9.9 rpg. Anyone attempting to take the ball at him should first consider two things: 1) his 260 lb. frame and 2) his 2.9 bpg. It’s a shame that the rest of team is so bad that Sweetney and the Hoyas might miss the tournament.

Luke Ridnour, 6-2 guard, Jr., Oregon – Don’t be fooled by the hair, this kid comes to play. Although this season can’t quite compare to last year’s Pac-10 championship for the Ducks, it hasn’t stopped Ridnour from putting up some outstanding numbers (19.3 ppg, 6.5 apg, 3.1 rpg, 1.9 spg). He’s a great college guard who lacks the size to make it at the next level.

Reece Gaines, 6-6 guard, Sr., Louisville – Coach Rick Pitino is a basketball mastermind, but his team wouldn’t have that impressive 19-4 record without Gaines. After trying him at the shooting guard for a while, Pitino moved him back to the point and the results have been outstanding (18.6 ppg, 5.2 apg, 2.7 rpg, 1.6 spg).

Mario Austin, 6-9 center, Jr., Mississippis State – Even though he missed MSU’s first six games due to academic ineligibility, Austin has more than made up for his time off with his huge stat lines (16.9 ppg, 8.5 rpg). He could lead the Bulldogs deep into the tournament if he plays tougher defense (only 0.6 bpg).